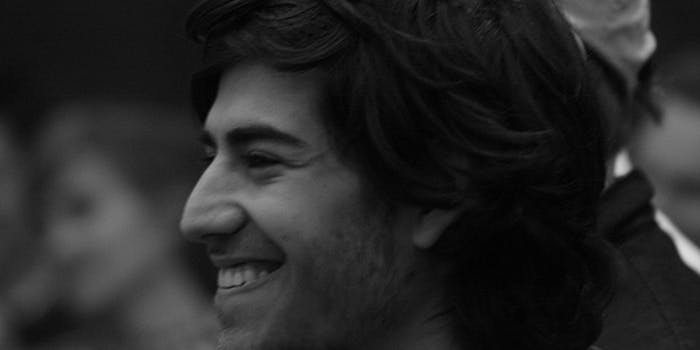 Wednesday night, Anonymous announced the second phase of OpAngel, the initiative in memory of internet pioneer Aaron Swartz that would shake up the laws criminalizing hacktivism.

So opens a Pastebin press release from the amorphous hacktivist collective Anonymous, recently in the news for supporting a kidnapped 5-year-old, petitioning the White House to declare DDoS attacks as a form of protected speech, and bringing attention to a gang rape in Steubenville.

On Wednesday night, the group announced the second phase of OpAngel, the initiative in memory of internet pioneer Aaron Swartz that would shake up the laws criminalizing hacktivism.

PaperSec, the postering arm of Anonymous, has created another flyer for the Op, to be distributed as handouts and posters. In traditional fashion, phase two was announced on Pastebin as a transcript of a YouTube video.

OpAngel succeeded in its initial goal of preventing the Westboro Baptist Church from picketing at Swartz’s funeral, and has now set its sights on reforming the Department of Justice and the way information-freedom fighters are prosecuted.

The effort brings together teams of Anons from AmeriSec, which aims to empower citizens of the U.S. to improve their government and their country; TylerSec, Anonymous’s controversial “WikiLeaks killer” peer-to-peer sharing network; and OpAngel itself.

The petition to pardon Swartz that originated in OpAngel Part One is ongoing, although charges were dropped because the accused was deceased—rather than for any political reason.

“We cannot pretend that our system is just when perpetrators of violence are dealt lighter sentences than those whose alleged crimes are essentially victimless,” reads the OpAngel phase two announcement.

Swartz was a passionate advocate of the principle that free access to information is the foundation of a just society. His influence extended beyond the invention of RSS, Reddit, and the Creative Commons Foundation, which he cofounded: If you subscribe to, follow, or allow others to subscribe to your blog posts, you are using technology that Aaron Swartz invented.

He was facing a potential 35 years in prison for his release of files from JSTOR, an online publisher of academic papers which declined to cooperate with the DOJ’s case against him. JSTOR has now made its files available to the public in a limited manner, and supporters have created the JSTOR liberator, a script which allows you to access and disseminate random articles, adding them to a growing archive.

Academics began tweeting links to their own papers in PDF form with the hashtag #PDFTribute, essentially making an end run around JSTOR and other paper-retentive outlets.

TylerSec claims to have released 33 GB of JSTOR files, the first official leak. Although it was announced a year ago as an Open Source and extra-legal sharing system, the files currently exist only in a channel on Retroshare. As Gawker writer Adrian Chen pointed out, there’s reason to believe this “leak” is simply a repost of materials already in the wild. Still, it’s a very flashy PR maneuver.

Prosecutor Carmen Ortiz is a particular target of OpAngel. She’s a hardliner who sought a 35-year penalty for Swartz for the JSTOR incident. Ortiz’s husband, Tom Dolan, recently took to Twitter to attack the Swartz family’s response to their son’s suicide. He has since deleted his account, but the damage was done: The petition to remove his wife from office for overreaching her authority now has more than 40,000 signatures.

The planned activities of phase two of OpAngel:

Now at least they will be expected.