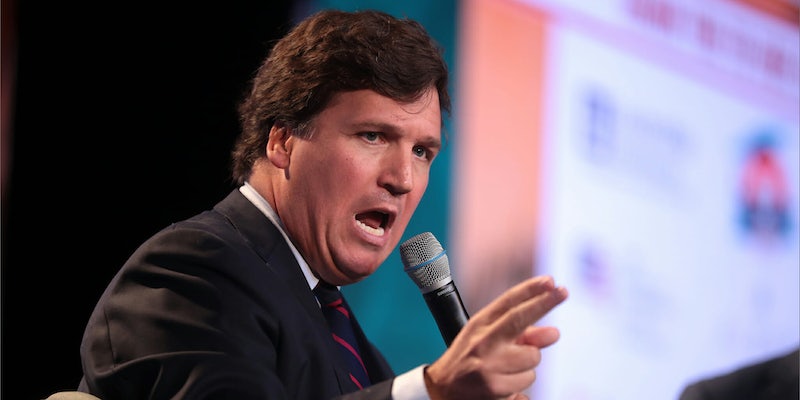 He made controversial comments about Iraq, Obama, and more.

Media Matters For America, a left-leaning media watchdog organization, released more audio of Carlson making appearances on the “Bubba The Love Sponge Show.” A different batch of audio was released the day before.

In the audio, the Fox News host can heard saying that Iraq is a “crappy place filled with a bunch of, you know, semi-literate primitive monkeys.” He added that he has “zero sympathy” for Iraqis because it is “a culture where people just don’t use toilet paper or forks.”

Carlson also questioned “how Black” former President Barack Obama is during an appearing on the radio show in April 2008.

“How is he Black, for one thing? He has one white parent, one Black parent. So that makes him, I mean, why isn’t he white?” he says in the audio.

In another piece of audio, Carlson tells the radio host that he liked him, adding “I actually mean it in a completely faggot way.”

The new audio was released by Media Matters around the same time the Fox News host went on air on Monday night.

"You know the role you're required to play. You are a sinner begging the forgiveness of Twitter."@TuckerCarlson's opening monologue was a dissection of the internet mob and outrage culture in the wake of resurging comments Carlson reportedly made on radio shows. pic.twitter.com/S7wxtMrpwl