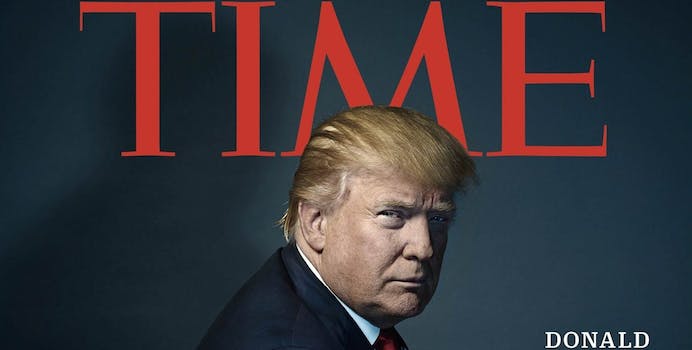 If Donald Trump hates fake news so much, why are there fake Time magazine covers hanging in his golf resorts?

If there’s one thing that makes President Donald Trump angry… well, OK, a lot of stuff makes Donald Trump angry. But certainly one of the biggest is what he calls “fake news,” or more commonly “FAKE NEWS!” In fact, according to a recent Entertainment Weekly article, the president has mentioned “fake news” in 53 tweets since the end of last year.

Reports by @CNN that I will be working on The Apprentice during my Presidency, even part time, are ridiculous & untrue – FAKE NEWS!

Wow, CNN had to retract big story on "Russia," with 3 employees forced to resign. What about all the other phony stories they do? FAKE NEWS!

But there’s one instance when the president seems OK with fake news: When he’s on the cover of a fake Time magazine.

A Time Magazine with Trump on the cover hangs in his golf clubs. It’s fake. https://t.co/GbabQP5hXQ pic.twitter.com/EFTEcyasRE

“Donald Trump: The ‘Apprentice’ is a television smash!” reads the headline. “TRUMP IS HITTING ON ALL FRONTS . . . EVEN TV!” proclaims another headline above the picture of Trump. The cover is dated March 1, 2009. According to the Washington Post, the cover hangs in at least four of Trump’s golf clubs: two in the United States and two overseas.

The thing is, not only did Trump not appear on any cover of Time magazine at all in 2009, Time didn’t even put out an issue on that date. They did put out an issue on March 2, 2009, but it featured a picture of actress Kate Winslet, who was nominated for best actress that year. An award that, by the way, she would go on to win.

“I can confirm that this is not a real TIME cover,” Kerri Chyka, a spokeswoman for Time Inc., wrote in an email to the Washington Post.

James Poniewozik, who was Time‘s Television critic in 2009, also weighed in to let people know the cover was a fake.

As Time's TV critic at the time, if I had called The Apprentice's ratings a "smash" in 2009, I would've had to resign in disgrace https://t.co/OZQBLIqJVG

White House spokeswoman Sarah Huckabee Sanders declined to say whether  Trump knew about the fake magazine cover. “We couldn’t comment on the decor at Trump Golf clubs one way or another,” Sanders wrote in an email to the Post.

One thing we can say for sure: Most Americans, regardless of their political leanings, would probably still rather see Kate Winslet on the cover of a magazine.