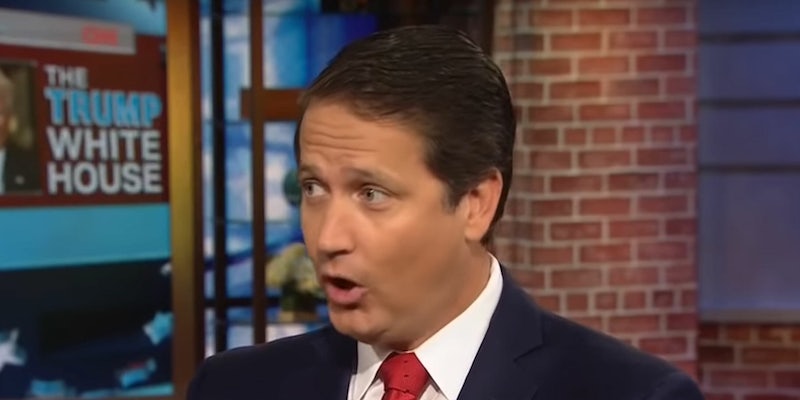 The senator joins a growing list of politicians skirting the president's history of racism.

Georgia State Sen. Michael Williams stunned CNN anchor Victor Blackwell and viewers on Saturday by saying that “it would not necessarily matter” if President Donald Trump said the N-word before he became president.

In a CNN interview with Blackwell (who is Black), Williams was asked by Blackwell if it would matter to him if President Trump had said the N-word, as accused recently by former White House aide Omarosa Manigault-Newman.

“Yes, it would matter. It would matter as an individual,” Williams said. “It would not necessarily matter to me as the person that is running our country.”

@VictorBlackwell has a level or restraint that I wish I possessed,, cause some choice words would have flown out my mouth, but that is why he is one of the best journalists out here. Props dude https://t.co/kDoPhzVwsf

When pushed by Blackwell on the issue, Williams agreed that he would take issue with Trump saying the N-word outside the context of being the president.

“He did not use the N-word as the office of the president,” Williams said. “Now if he was president and he goes out on TV and uses the N-word, yes, I would have a major problem with that, but he did it before he was president.”

When you’re smart enough to know you’re *supposed* to have a problem with Donald Trump using the n-word, but too stupid to know how to pretend you really do: pic.twitter.com/AtWOjD7wFb

As the conversation continued, Williams appeared to lose his footing in repeated attempts to justify the president’s alleged behavior prior to his presidency. Later in the conversation, Williams told Blackwell that he always believes using the N-word is wrong, but that he draws a distinction between Trump’s current office and his past life. Trump is 72 years old, and he would have been between the ages of 58 and 68 during the recordings of The Apprentice. That’s the time period Manigault-Newman claimed to have recorded the then-TV celebrity saying the N-word.

Williams did not make any distinction on why a 58 to 68-year-old man would have a wildly different outlook on race by the age of 72.

“I don’t have a problem with Donald Trump having used it in the past, as my president,” Williams said.

After asking Blackwell what Trump’s age was, Williams said that, “60, 50 years ago, we were not in a society that we are in now where people freely use that word,” which is historically false.

Williams attempted to counter Blackwell by asking him if he knew how old Trump was when he said the word. This doesn’t mesh with reality, considering Trump has been an adult since 1964, four years before the end of the Civil Rights Movement. Trump and his family have a long, sordid history of racist behavior. Trump himself took out a full-page ad in various New York papers calling for the death penalty against a group of black teenage boys (known as the “Central Park Five”) who were wrongly accused of beating and raping a woman.

In an interview with Larry King that same year, Trump defended his calls for the death penalty against the teens by saying “maybe hate is what we need if we’re gonna get something done.”