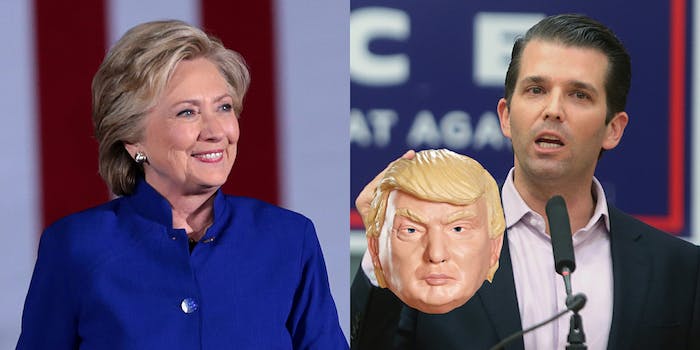 Not even Halloween stands a chance in the weird whirlwind of 2017 America—especially when warring political factions are involved.

On Monday, Hillary Clinton joked about her Halloween costume, telling a crowd in Chicago gathered for an event promoting her recent book What Happened, “I’ll maybe come as the president.”

In case anyone’s forgotten, Clinton is not president of the United States. That title belongs to one Donald Trump, who beat the former Democratic presidential nominee in the 2016 election.

Clinton’s quip came amid news that two members of Trump’s 2016 campaign—former chairman Paul Manafort and staffer Rick Gates—were indicted on a combined total of 12 charges, while unsealed court documents revealed that a third campaign staffer, former foreign policy adviser George Papadopoulos, pleaded guilty to lying to the Federal Bureau of Investigation about his attempts to dig up “dirt” on Clinton from Russian government sources.

That heavy news did nothing to damper Donald Trump Jr.’s sense of humor, however. Responding to Clinton, the president’s eldest met her joke with a zinger of his own.

It’s a fair way to clap back. Clinton tried to be president but Trump Jr.’s dad beat her in the Electoral College.

Thing is, neither Clinton’s vaguely self-depreciating joke nor Trump Jr.’s response are all that clever. And while President Trump masks do, of course, exist, some (your author included) might find it a bit creepy that Trump Jr. owns one. (Editor’s note: An informal poll of the Daily Dot’s newsroom found editors divided on the creepiness of owning a dad mask.)

Halloween costume shopping today. What do you think? Hard not go with the MAGA theme… Chloe likes it too. #maga #halloween #halloweencostume #shopping #trump

Alas, this is the plateau on which American political discourse has landed: Everything is political now, and it’s all mind-numbingly dumb.