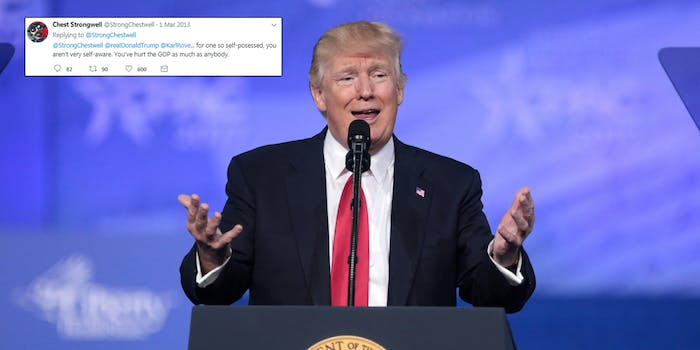 Everyone knows President Donald Trump is bad at Twitter despite it clearly being his favorite form of social media.

He routinely misspells words, makes unsubstantiated claims, more than a quarter of his account’s following is made up of inactive accounts, and he’s even retweeted someone who called him a fascist.

We’re going to add one more thing to the mounting evidence that he’s not great at using Twitter: His first “like” is of someone dissing him.

Trump only has 19 likes among his more than 32,000 tweets—so it’s a rarity that he finds something worthy of a click of the little heart-shaped icon, showcasing to the world that he approves of a tweet. In fact, five of his 19 likes are things he’s tweeted and another five likes are things his family has tweeted.

But one of the likes is an outlier.

In March 2013, back when the idea of him being president was a throwaway joke, Trump liked a comment from @StrongChestwell—an account that as of Friday evening had 3,558 followers.

@StrongChestwell responded to a tweet Trump sent out blasting Republican strategist Karl Rove and pointed out that Trump’s criticisms were a bit hypocritical.

Trump tweeted: “Continued success is built on building a brand people know will deliver. Unless you’re @KarlRove. Then you just blame the Tea Party.”

Continued success is built on building a brand people know will deliver. Unless you’re @KarlRove. Then you just blame the Tea Party.

@StrongChestwell was among the 47 people who commented on the tweet (this was before Trump’s Twitter feed was flooded with millions of people commenting on everything he said), and had a few things to say to the—unbeknownst to anyone—future president.

“@realDonaldTrump @KarlRove You act like it’s Rove’s fault the teabaggers marginalized the right as fundamentalists and fringe lunatics…in much the same way as you whine about China while championing free market principles…for one so self-possessed[sic], you aren’t very self-aware. You’ve hurt the GOP as much as anybody,”  @StrongChestwell wrote in a series of tweets.

Well, Trump evidently enjoyed the final part of @StrongChestwell’s Twitter storm—including the point where he calls Trump “self-possessed,” because he liked it.

@StrongChestwell told the Daily Dot on Sunday that he remembered Trump liking the tweet, calling it “generally puzzling” to see him like a tweet where he was calling out Trump.

“I remember the context of the tweet,” they told the Daily Dot in a Twitter direct message. “Rove was being critical of the Tea Party pushing the GOP further into the extreme right and Trump took a shot at him for it. This was around [Trump’s] ‘big reveal’ press conference about Obama’s birth certificate and I was basically saying you’re the one helping marginalize the right as lunatic nutters and fringe conspiracy theorists and it’s hurting your party by alienating sane people.”

As to why Trump liked a tweet where he was being called out? @StrongChestwell can only speculate. Trump blocked @StrongChestwell approximately three years ago, and it’s probably not a coincidence.

“If I had to guess I’d wager he misread the subtext and was dissing Rove. It was a two-part tweet I think, maybe he was busy thinking about how ugly windmills are and lost the thread.”

It’s likely we’ll never know. The White House did not respond to a request for comment from the Daily Dot regarding Trump’s first liked tweet.