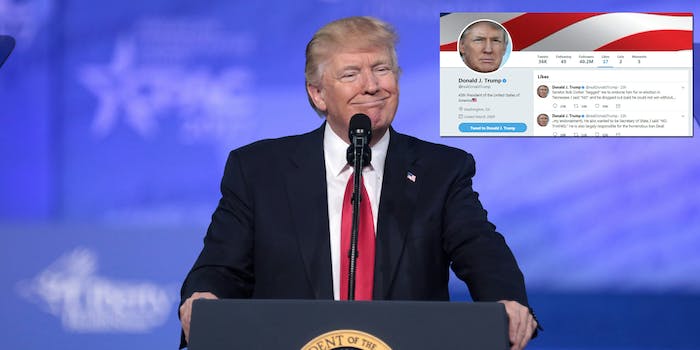 Donald Trump is liking his own tweets now

President Donald Trump has committed a social media sin—he liked his own tweets.

Over the weekend, Trump slammed Sen. Bob Corker (R-Tenn.), who announced he would not run for reelection in 2018,  claiming that the senator “begged” him to endorse Corker ahead of the upcoming midterm elections.

The tweets set off a Twitter war, with Corker hitting back hard. The senator said Trump has caused the White House to “become an adult day care center.”

Trump apparently was fond of his unsubstantiated claims about Corker–so much so that he liked his own tweets.

As most people know, liking your own social media posts is considered quite gauche.

It’s unclear whether the like was made by Trump, or if his social media manager, Dan Scavino Jr., made the social media faux pas, perhaps by accident. Recent evidence strongly suggests Scavino runs Trump’s account, at least on occasion.

In the realm of political gaffes, liking one’s own tweet ranks relatively low. And it’s not like he liked a tweet of someone calling him a fascist or anything. Oh, right.