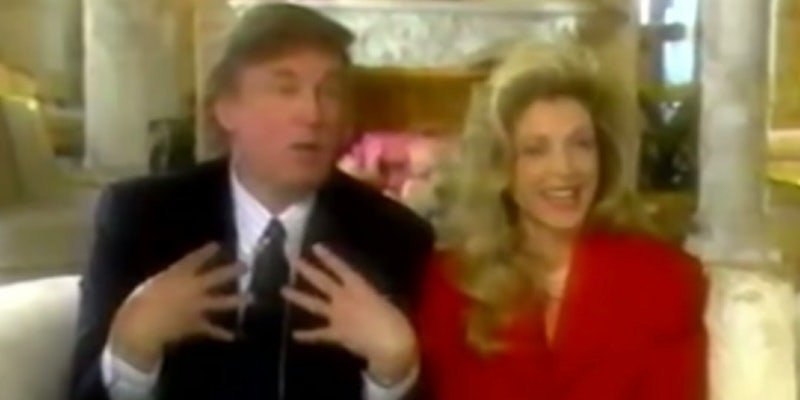 Trump sexualized his infant daughter in this 1994 interview

Following the death of British entertainment reporter Robin Leach on Friday, the journalist’s 1994 interview with Trump and then-wife Marla Maples recirculated. The video—which also made the rounds during the 2016 presidential campaign—shows Trump discussing his daughter on Leach’s show Lifestyles of the Rich of Famous, according to the New York Daily News.

Leach asks Trump what features Tiffany Trump, then 1-year-old, has from her mom and dad.

“Well, I think that she’s got a lot of Marla,” Donald Trump says. “She’s a really beautiful baby, and she’s got Marla’s legs.”

Then it gets worse. Trump mimes holding his chest and says, “We don’t know whether she’s got this part yet, but time will tell.”

When the nauseating interview resurfaced during Trump’s presidential campaign, Leach called the outcry “an overreaction.”

“I think that it’s just the piling on of those that dislike Donald,” Leach told Inside Edition at the time. “You’ve triggered a thought that I should send him a note saying, ‘Sorry I asked the question 22 years ago. How ridiculous they dig it up now.’”

Leach had been hospitalized since November for a stroke and died Friday in Las Vegas, according to the Hollywood Reporter. He was 76.