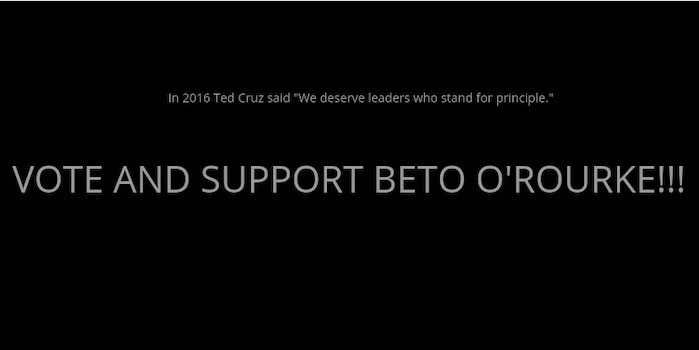 Tedcruz.com wants you to vote for Beto

The website has been trolling Cruz for years, and it's made a timely plea.

A site with the web address tedcruz.com is sporting an unlikely message.

The site, supposedly supporting the current junior U.S. senator from Texas, instead displays a large black screen depicting the words “In 2016 Ted Cruz said ‘We deserve leaders who stand for principle.’ VOTE AND SUPPORT BETO O’ROURKE!!!”

The website does not go into any further detail, not even redirecting to a site promoting early voting or informing potential supporters of either candidate on the issues. A Google search for the site will reveal the text of the front (and only) page in its site description.

Tedcruz.com has long been a minor, but likely irritating, thorn in the side of the Republican senator. Back in 2016, Business Insider published an aptly named article titled “Go to tedcruz.com for an important lesson on why candidates should secure their web domains before losing.” Days after Cruz dropped out of the race for president, the site displayed a photo of Hillary Clinton alongside the phrase “Next president of the United States of America!!!”

Even before that, the site was used to quietly troll Cruz and his policies. In 2015, the site displayed an Obama-positive message.

People first became aware of the site’s shift to supporting O’Rourke back in mid-October, but with the swift approach of the midterms searches for both candidates are up. Cruz’s real pages can be found at tedcruz.org or cruz.senate.gov. For real information on O’Rouke and his campaign, tedcruz.com is severely lacking. Instead, interested voters should visit betofortexas.com or orourke.house.gov.

The Daily Dot reached out for comment to the Cruz campaign.