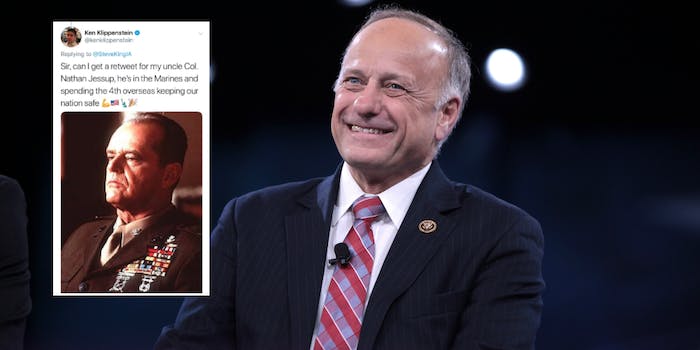 'Colonel Jessup and all of your Marines: God bless you all.'

Rep. Steve King (R-Iowa) was duped into offering his warmest praise for a fictional colonel character on Thursday.

“Sir, can I get a retweet for my uncle Col. Nathan Jessup, he’s in the Marines and spending the 4th overseas to keep our nation safe,” Klippenstein wrote, along with a photo of the colonel.

King, ever the ardent patriot, obliged Klippenstein’s request by quote tweeting a heartfelt message of support.

“Colonel Jessup and all of your Marines: God bless you all. You have our back and millions of us have yours! God bless America and all her warriors defending our Liberty! SK,” King responded.

Only the photo wasn’t of an actual warrior defending our liberty, at all, it was an image of Jack Nicholson’s fictional colonel character in A Few Good Men, Colonel Jessup. Nicholson played the villain in the 1992 film.

To top it off, King, who is best known for being racist, was then double duped by Klippenstein.

Klippenstein aptly changed his Twitter name to “Steve King is a white supremacist.”

Happy 4th of July everybody! pic.twitter.com/zjz4z2wn7y

That’s the moment King should have logged off for the day, but he didn’t.

King continued to quote tweet messages, one of which was a reply to an “inquiry” about the Betsy Ross flag that recently made a resurgence in the news. The Twitter user then changed their name to “Steve King drinks pee pee,” after they successfully made their way onto King’s Twitter account.

It was to get stupid little boys to ask stupid questions:-) https://t.co/mUyqU4PVrV

Upon learning of how easily King is duped, many began ragging on him with their own “pleas” for a supportive message.

Hey, Steve King, could you give a shoutout to The General from The General Car Insurance Company? pic.twitter.com/LdmtvcDGpB

STEVE KING: We honor the courage and bravery of men like Sgt. Beetle Bailey this 4th and all the men of Company A. pic.twitter.com/xNoD6IBx2t

Hey Steve King, let’s not forget Sgt. Carter, who served in the U.S.M.C in the mid to late 60s. pic.twitter.com/wjc8pJdjtJ