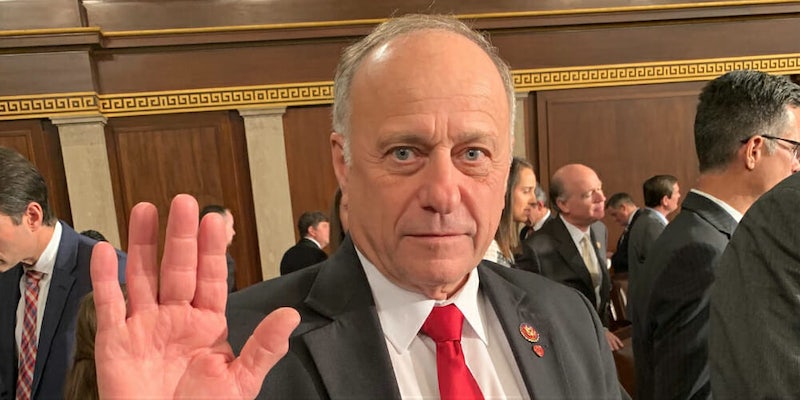 He just doesn't know when to stop.

Rep. King made news recently by asking in an interview with the New York Times, “White nationalist, white supremacist, Western civilization—how did that language become offensive?” (He’s made the news not often enough for the innumerable racist things he’s said historically.) People were generally horrified; even conservative personalities like Ben Shapiro called for King to be censured by Congress.

Congress didn’t go that far (although some Democrats were ready to take it there), but they did remove King from all of his seats in the House Committees on Agriculture, Small Business, and the Judiciary. The House also passed a resolution titled, “Rejecting white nationalism and white supremacy,” which referenced King’s comments. It passed 424 to one, with the only nay vote from Rep. Bobby Rush of Illinois, who said the resolution didn’t go far enough.

Fresh off a thorough rebuking for wondering why people would be offended by white supremacy, King took to Twitter, like so many public figures on Martin Luther King Jr. Day, to share a quote from the reverend, honoring his memory. At least, that was the idea.

Dr. Martin Luther King, Jr. gave his all for all. I have long agreed with his speeches and writings. Today I think of this MLK quote, “Our lives begin to end the day we become silent about things that matter.” May we renew ourselves in his teachings so that he can RIP.

The trouble is, the quote King shared isn’t actually a quote from MLK. It’s not even a quote from anyone. People on Twitter were having none of the self-identified nationalist’s fake MLK quotes.