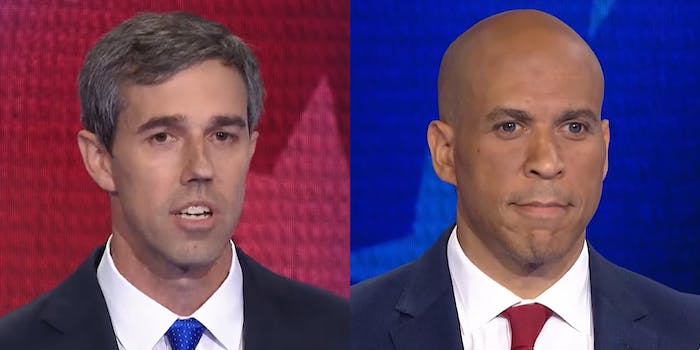 Spanish was the breakout star of the first Dem debate

Last night, in part one of the first Democratic debate, where the first 10 candidates took the stage and discussed tax reform, gun control, climate change, and Iran, there was one ultimate winner that viewers weren’t really prepared for: Spanish.

The Spanish spell started early on in the debate, with O’Rourke randomly breaking into Spanish in his first comments of the night, when answering a question on changes in tax rates.

“This economy has got to work for everyone and right now we know that isn’t, and it’s gonna take all of us coming together to make sure that it does,” he said, before repeating the quote in Spanish.

His use of Spanish was such a blatant way for him to get out of answering the question that moderator Savannah Guthrie explicitly asked him if he would like a few extra seconds to answer the actual question.

And there were reactions.

It was actually kinda uncomfortable listening to @BetoORourke and @CoryBooker. Up there sounding like they were having a high school Spanish class oral exam. #DemocratDebate https://t.co/slPacnvTe4

Beto O' Rouke is like if gentrification was a person

When your friend comes back from study abroad #DemDebate pic.twitter.com/pvw4sYWhHu

When Dad says "Hola, como estas?" to the waiter at the Mexican restaurant #DemDebate pic.twitter.com/64FY2LV6kp

Booker himself responded to a question on immigration in Spanish, which also garnered some responses.

Now we know why Cory Booker looked perturbed when Beto O’Rourke began speaking in Spanish. Booker was going to do it first.

Julian Castro speaks English and articulates a plan as a Latinx candidate.

Cory Booker speaks Spanish to pander and tries to say what Castro says.

That's all you need to know on the difference between them.#DemDebate #DemocraticDebate

So now we know that look on Booker's face was rage that he wasn't the first one to speak Spanish on stage.

Even Rep. Alexandria Ocasio-Cortez (D-N.Y.) thought it was a bit funny. But she appreciated the attempt.

“I thought it was humorous at times,” she said during an appearance at The Late Show with Stephen Colbert, adding that she, “thought it was a good gesture to the fact that we are a diverse nation.”

Meanwhile, Castro, whose grandmother was an immigrant from Mexico, put his closing thoughts in Spanish as well.

He followed it up with, “The very fact that I can say that tonight shows the progress that we have made in this country,” he said.

“If I’m elected president, I will work hard every single day so that you and your family can get a good healthcare, your child can get a good education, and you can have good job opportunity,” he said, “and on January 20, 2021, we’ll say ‘Adios’ to Donald Trump.”

His concluding sentence earned him massive applaud, and sparked off the hashtag #AdiosTrump:

What irks me the most is the fact that people will eat Mexican food and Mexican restaurants but then turn around and make racist comments. #AdiosTrump

When the press counted him out

When the establishment said he was a long shot

When the far right said he'd never make it@JulianCastro stepped up to the plate and proved every single one of them wrong.#AdiosTrump #DemDebate

Spanish being the highlight of the night—whether Warren starting off her speech with a reference to the “Latinx community” or the words from Booker and O’Rourke—has definitely heightened the anticipation around tonight’s debate, where 10 other candidates will be speaking.

Marianne Williamson from Texas, one of the lesser known candidates, tried to address it with humor.

While the use of Spanish evoked humor and at times criticism among many, it’s a notable effort at a time when the country is divided over issues such as immigration. That often trickles down to everyday instances such as lawyer Aaron Schlossberg, who went viral last year for threatening to call ICE on two women for speaking Spanish, as well as numerous other such interactions where people are constantly policed for speaking a language other than English in public.