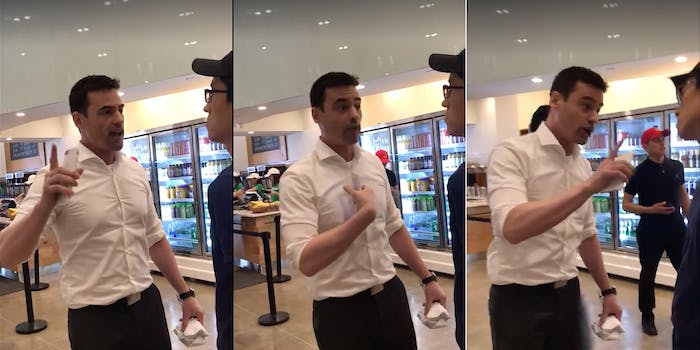 'My guess is they're undocumented.'

A Facebook video that went viral on Wednesday shows a New York lawyer going off on a racist tirade and threatening to call immigration authorities—all because women at a lunch chain were speaking Spanish.

“Every person I listen to—he’s speaking it, she’s speaking it. This is America,” shouted the man, who has been identified by the Forward as Aaron Schlossberg, owner of a Manhattan law firm.

Gothamist reported that the video, originally posted by Edward Suazo, was filmed at a Fresh Kitchen in Manhattan. Suazo wrote on the post that his wife and her friend were speaking Spanish with the cashier when Schlossberg went off and threatened to call Immigration and Customs Enforcement.

“Your clients and your staff are speaking Spanish to staff when they should be speaking English…” Schlossberg says to a manager in the video. “My guess is they’re undocumented, so my next call is to ICE to have each one of them taken out of my country. If they have the balls to come here and live off my money—I pay for their welfare. I pay for their ability to be here.”

Please let Attorney Aaron M. Schlossberg of Midtown Manhattan know I’m trying to get in touch with him. I have a few questions.

If you reach him, ask how often he eats at the Fresh Kitchen next door to his office and if he has a problem with people speaking Spanish there. pic.twitter.com/8pgQ6wZNzi

Black Lives Matter activist Shaun King pointed out that this was not the first time Schlossberg has been filmed for displaying bigotry. Last year, a viral video showed him at a pro-Trump rally aggressively shouting at pro-Palestinean counterprotesters.

According to the Forward, Schlossberg’s firm donated $500 to President Donald Trump’s campaign.