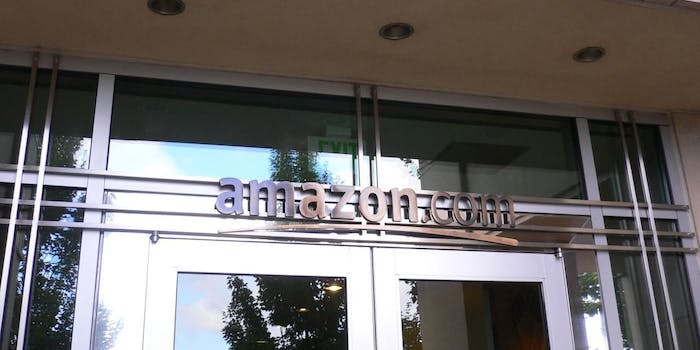 It's raised some questions.

An employee at Amazon tested positive for coronavirus, according to multiple reports, and was then sent home from work.
Amazon shared the message with its employees in an email on Tuesday, which was reviewed by the Seattle Times.

According to a screenshot of the email shared by Twitter user @LiberalCEO, the employee returned home on Tuesday as they were feeling unwell and “has not entered Amazon offices since that time.” The user did not respond to the Daily Dot’s request for further details.

“We notified the employees who we knew were in close contact with this employee,” read a part of the email.

“The risk of transmission for employees who were not in close contact with this individual is assessed to be low,” the email said, urging anyone with symptoms to not come into work and seek medical assistance.

The Amazon employee is the latest in a spree of diagnoses in Washington state, where officials confirmed nine deaths from coronavirus as of Tuesday. Several more have been reported sick from the virus, with two people who are in their twenties, according to the New York Times. The disease is said to disproportionately affect senior citizens and/or those with underlying health conditions. Globally, the virus has killed 3,000 people. All the people in the U.S. who have died from the disease were in Washington state.

Amazon has an extensive healthcare plan for its employees, even including travel programs where they cover the cost of sending employees to different states for appropriate treatment and better care.

But it’s not clear to what extent Amazon is helping with the quarantine of the employee and/or if the employee’s time not coming into work would take away from their wages.

In a statement to the Daily Dot, Amazon said it was “supporting the affected employee who is in quarantine.”

Meanwhile, given its record of how poorly it treats its warehouse employees, many expressed concern at the news, and some were (perhaps misguidedly) concerned about their packages:

And there were criticism in general about how underprepared the U.S. is in addressing the crisis, as documented by one Seattle resident in a series of tweets:

According to the email sent by Amazon, the employee worked in the “Brazil building,” which is a 12-story building and has numerous other Amazon offices around it.