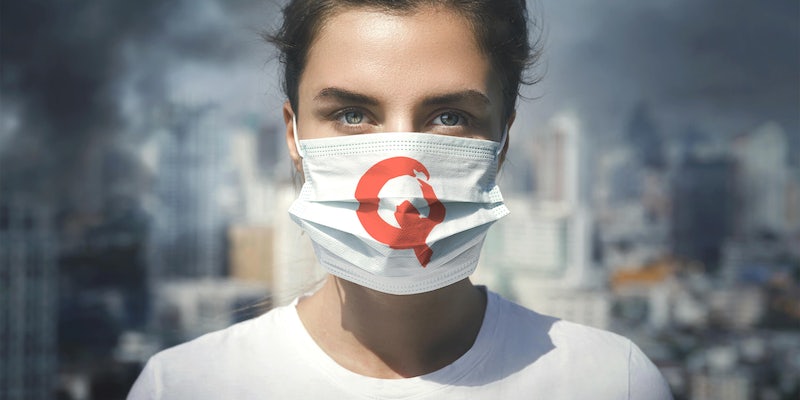 The QAnon guide to coronavirus

It’s no surprise that some of the biggest sources and spreaders of COVID-19 conspiracy theories have been believers in the QAnon conspiracy theory. A worldwide outbreak of disease with a possibly murky origin that worldwide governments and medical experts have struggled to get a handle on?

That’s gold for a conspiracy theory movement based around a mostly silent battle between good (the Trump administration) and evil (the deep state, George Soros, Democrats.)

But what makes the QAnon conspiracy theories about COVID-19 especially interesting is that Q hasn’t actually mentioned the illness as of late February. Research prompts in the Q movement almost always come from the top down. This time, though, silence means the conspiracies are coming from the bottom up—from Q followers and the interpreters who have developed large fan bases cranking out Twitter threads and videos.

This likely makes it the first time that Q has actually been active and posting, but Q gurus take their research in their own direction without guidance from on high. Q isn’t even necessary for Q followers to develop theories about the pandemic.

Because of this, the QAnon movement hasn’t had a singular conspiracy theory to rally around. Is it the deep state at work? The good guys fighting back? A hoax? A prelude to genocide? Q theories are all over the place.

Many completely contradict each other. None are supported by facts in evidence. But all of them find some kind of hidden or conspiratorial angle to an outbreak that, by its very nature, is prone to misinformation and fringe theories.

With the Q movement continuing to hang on to its small but vocal following, it’s worth taking a look at what Q believers think it is “really” happening in terms of the coronavirus outbreak—and whether it’s really “really” happening.

COVID-19 is merely a media-driven panic, Trump has it under control

It’s in the nature of QAnon believers to think that no matter how bad things are in the world, President Donald Trump is winning and is 12 steps ahead of everyone else. The coronavirus outbreak is no different.

According to a number of major QAnon promoters, everything that’s happening with COVID-19 is a missile fired by the media and pointed directly at Trump’s re-election campaign. All of it is a hoax, created by the media and Never Trumper doctors to make Trump look incompetent and out of control in the face of a “horrible pandemic.”

The reality that “they” don’t want you to know the illness is fairly minor and Trump’s heroic measures have mostly kept it out of the United States, with only a few easily treatable cases.

However, the scope of the outbreak isn’t clear yet, and every day seemingly has brought news of a new country dealing with cases and deaths. Beyond that, Trump gutted the budget for the CDC and also dissolved the White House’s pandemic response team, instead putting Vice President Mike Pence in charge. So while COVID-19 hasn’t had a particularly dramatic impact in the U.S. quite yet, that may not be because of Trump’s measures, but in spite of them.

The end of February saw a massive dip in the stock market, with the Dow losing nearly 3,000 points over a week thanks to international fears of the coronavirus outbreak royally screwing up global supply chains (and also killing a lot of people).

Because Trump has routinely touted the success of the Dow as an arbiter of his own success as the president—while ignoring that only half of Americans own stocks—it’s natural to think of that big of a plunge as something potentially harmful to his re-election chances.

And so, the conspiracy theory has gone out—advanced by everyone from major QAnon influencers to Rush Limbaugh himself—that the deep state is at work, pumping up fears of the virus as a way to hurt the economy, and thereby hurt Trump. This would fit with other QAnon paranoia that the deep state is constantly on the verge of assassinating or overthrowing the president, only to be thwarted by patriots on the side of good.

While a stock market dip isn’t quite as dire as, say, the QAnon-exposed “plot” that a deep state submarine fired a missile at Air Force One, a major economic calamity could indeed have a drastic effect on Trump’s chances of staying in office. A version of this theory is that the CDC is overhyping the coronavirus threat because a top official, Dr. Nancy Messonnier, is related to former Deputy Attorney General and Trump foe Rod Rosenstein. This connection was first noted by a minor QAnon account, and spent the week flying around right-wing media.

While not necessarily a QAnon-triggered conspiracy theory, rumors are going around social media that coronavirus and the rollout of 5G internet are related. 5G paranoia very much embodies its own conspiracy theory movement, and much of this particular paranoia stems from one gibberish-filled viral Facebook post claiming that the citizens of China were given a “digitized RNA virus” activated by 5G internet and spread via “smart dust” that is meant to mimic the symptoms of coronavirus. There haven’t been any Q posts mentioning 5G, but the poster does speculate a lot about who really controls the internet, so it’s not out of the question that these movements will merge at some point.

One aspect of conspiracy culture that’s very much part of QAnon, though, is the idea that Trump will soon declare martial law to begin the great elimination of the deep state.

While the federal government can’t generally declare martial law unless there’s some kind of congressionally-recognized national emergency, state governors can. It’s not outlandish to think that a state overrun with coronavirus cases and needing to keep a tight quarantine might order something like this. If that happens, expect QAnon fans to spend a lot of time high-fiving and patting each other on the back for how right they were.

And Q fans love to claim that old drops were actually predictions that will eventually be proven right, as if Q has the ability to see the future. So Q gurus have had an especially fun time going through drops from the last two-plus years and retrofitting them to “actually” be about coronavirus.

One “discovery” from the drops is that Q foretold two years ago in January that “your families are safe.” While Q followers assumed at the time that Q was talking about the upheaval stemming from prophesied mass arrests, they’ve convinced themselves the post was about coronavirus. Then there are the various Q drops related to the “Corona” spy satellite (which hasn’t been used since 1972)—which are now “actually” about coronavirus.

Finally, there are Q’s drops conveying the standard conspiracy theorist line that the medical establishment is crooked and wants to push killer vaccines on us. The way to defeat their evil plan to vaccinate you to death is by instead drinking large amounts of medical bleach—which big pharma doesn’t want you to have, but a bunch of Q gurus swear by.

Ultimately, nothing prevents QAnon believers from buying into all these conspiracy theories—even if it doesn’t seem possible for the outbreak to be both a hoax and a plague. Until Q actually weighs in with drops about the coronavirus outbreak, expect the movement to continue to pump out distrust, disinformation, and an unbreakable belief that no matter what the mass media is telling you about the pandemic, Trump has it all under control.