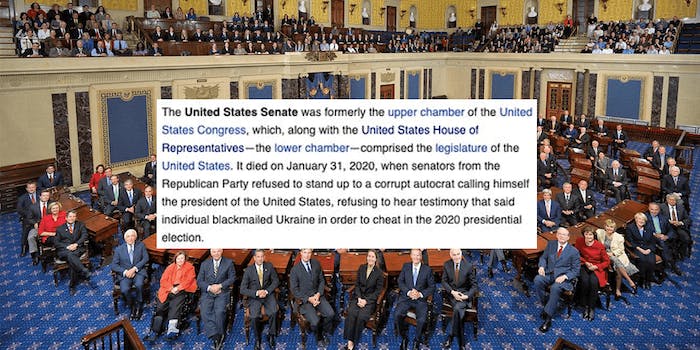 A prankster altered the U.S. Senate’s Wikipedia page to state that the governmental body was “dead” following the refusal of Republicans to allow witnesses to testify in the ongoing impeachment trial.

The move by conservatives lawmakers, which all but ensures that President Donald Trump will be acquitted, prompted Wikipedia user Flyboyrob2112 to make numerous changes to the Senate’s description.

The alterations not only declared the Senate deceased but labeled Trump as “a corrupt autocrat” as well.

As noted by HuffPost, the user changed the page at least four times, with each edit surviving for roughly one minute before being changed back to the original phrasing.

A Twitter user by the name of Bruce Halperin claimed to be behind the Flyboyrob2112 username and took credit for the changes on Friday.

“I made some edits to Wikipedia this morning,” Halpersin said alongside numerous hashtags.

The impeachment proceedings stem from a July 2019 phone call, in which Trump is accused of asking Ukrainian President Volodymyr Zelensky to investigate former Vice President Joe Biden in exchange for security aid.

Wikipedia has long been a political battleground where edits are frequently made to the pages of politicians and the like.

In just one incident, Sen. Susan Collins (R-Maine) had her personal Wikipedia page edited in 2018 to state that she was a “traitor to women.”