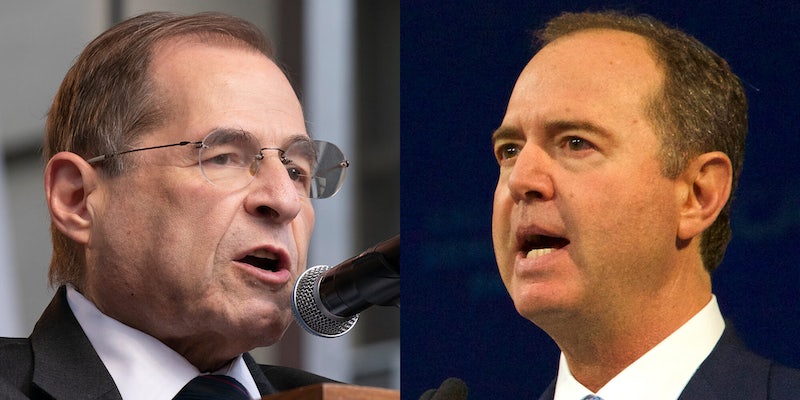 Dems bumbling close to impeachment is an extremely relatable meme

While most of you were sleeping or absorbing The Good Place series finale last night, the questioning portion of the Senate impeachment trial lumbered to a close—but not without one last moment of high calamity.

After Chief Justice John Roberts read the final question of the proceedings, Rep. Adam Schiff (D-Calif.) stood to give the Democrats’ answer. Before he took more than a step towards the podium, out of nowhere Rep. Jerry Nadler (D-N.Y.) blindsided him and rushed to the microphone as Schiff called, “Jerry, Jerry, Jerry,” in an attempt to stop him.

No dice. Nadler had something to say and he wasn’t letting anyone, not even the lead impeachment manager, get in his way.

Rep. Jerry Nadler got up to get the last word in for the night. Rep. Adam Schiff, the lead impeachment manager, got up and tried to get Nadler's attention: "Jerry. Jerry. Jerry." pic.twitter.com/M5K2OBXoK1

MAGA world was highly amused by the apparent conflict between the Democrats. Republicans, including some of their biggest social media stars, used it as an excuse to poke fun at the congressmen’s weight, physical appearance, and intellect; Nadler’s gait; and mock them specifically and Democrats generally in other similarly highbrow fashion.

When I'm depressed, I remember Adam Schiff is going to replay that moment Jerry Nadler stole his chance to answer the last question in the impeachment trial for the rest of his miserable life.

I find that helps a lot.

As the hits kept coming, Republican politicians and right-wing media joined in on the fun. Rep. Jody Hice (R-Ga.) tweeted, “Sidelined Nadler—who even Schiff is apparently embarrassed by—jumps to give us one last condescending monologue for the night. @realDonaldTrump‘s acquittal is only a matter of time.”

Conservative outlet Town Hall penned an article about the “hilarious” dust-up, writing on Twitter, “Thank you for the much-needed laugh, Schiff.”

The drama enticed the subject of impeachment himself, President Donald Trump, gleefully tweeting, “They are fighting big time!”

Adam Schiff when Jerry Nadler comes back from the podium. #ImpeachmentHearings pic.twitter.com/mCm7t1gFcO

And for the rest of his life @RepAdamSchiff will wonder if he would’ve made the difference??? pic.twitter.com/2LVFwsDZlJ

Later today, the Senate will vote on whether it will call witnesses and introduce additional evidence.