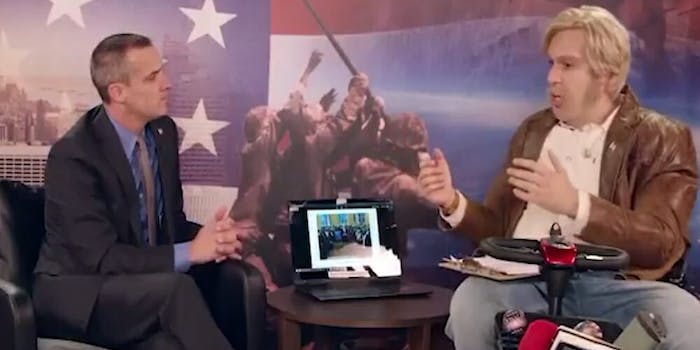 'Who is America?' strikes again.

Who is America? is making everyone wonder who’s next to fall prey to Sacha Baron Cohen‘s uncanny ability to trick people into uttering embarrassing and damaging things in front of a camera. On Sunday, he got a high-profile surrogate of President Donald Trump to defend some questionable characters.

Cohen morphed into Billy Wayne Ruddick Jr., creator of the (fake) right-wing conspiracy website Truthbrary.org. Ruddick’s website is dedicated to exposing the lies about the president. It’s not a LIE-brary, it’s a Truthbrary, and the website is still up and running.

Ruddick welcomed former Trump campaign manager Corey Lewandowski, who once mocked children with Down syndrome on national television and allegedly sexually assaulted a singer at a holiday party.

“With Charlottesville, where people attacked our president, why should the president pick a side between anti-fascists and fascists?” Cohen’s Ruddick character asked.

“You have to respect them,” Lewandowski replied.

Cohen tried to pry further, hoping to get an affirmation about “honest fascist people who want to express their right to start a genocide.”

Lewandowski’s reply here was more measured: “Look, I don’t know about that… but what I do know is this: If the law says that people can do a peaceful protest, then they should be allowed to do that.”

Ruddick asked Lewandowski if Trump is a racist or if he is the least-racist man alive. Lewandowski states that “after spending thousands of hours with Trump” on the campaign and in the White House, that “never, ever, ever” did he hear Trump utter a racist word in his life.

Here’s the segment in which Lewandowski says Trump is a person who respects a lot of people, calls the American people so smart for refusing to believe all the fake news, and sheds doubt on Miss Piggy’s legacy as a strong female.

I’m not sure how spending a couple of months with a person gives you the ability to vouch for all 72 years of his existence. Maybe Trump saved his best language for conversations that didn’t include his campaign manager?

The satirist and his crew have already duped a Georgia lawmaker into saying the N-word, administered a pedophile detector to Alabama judge Roy Moore, and made Sheriff Joe Arpaio admit he’d give oral to Trump.