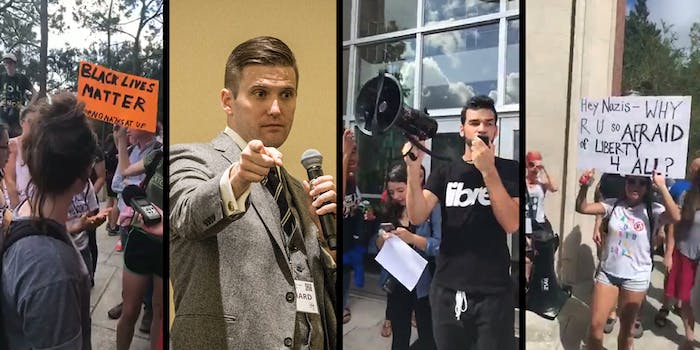 Florida's governor declared a state of emergency ahead of Spencer's speech at the University of Florida.

Florida Gov. Rick Scott has declared a state of emergency in preparation of a speech by white nationalist Richard Spencer at the University of Florida at Gainesville–but thousands of motivated activists are refusing to back down.

Several protests are being planned in response to Spencer’s speech on Thursday at Phillips Center for the Performing Arts at the University of Florida, which follows several other events in the past that sparked protests and counterprotests. Spencer was also a prominent member of the white nationalists who held a rally in Charlottesville, Virginia, that sparked violence and ultimately the death of one woman.

In advance of the speech, several protests are being organized by students and local residents to show their displeasure with Spencer speaking at the school.

“So long as this event is still scheduled, we will be coordinating rides from across the state to protest the event and not allow a repeat of the recent events from UVA to happen here at the University of Florida,” the No Nazis at UF page reads.

During a press conference on Monday, No Nazi at UF organizers said they will not be violent in any of their protests during Spencer’s speech. In another page hosted by the group, No Nazis at UF says the protests are necessary to counteract Spencer’s brand of “white supremacy and fascism.”

“We must stand together in the fight against white supremacy and fascism, and defend the most marginalized of our communities,” it reads.

Organizers of No Nazis at UF did not immediately respond to our request for comment.

We will be there Thursday, thousands strong protesting against fascism and white nationalism. We hope you will join us. #NoNazisAtUF

The group has linked to videos of protesters asking the school’s administration to stop the speech. In the video, a large group of people marched to the administration’s building and peacefully chanted, “I believe that we will win” while holding signs denouncing Spencer’s white supremacist views.

Organizers are heard in the video saying that “thousands” of people will come out to protest Spencer’s speech on Thursday. Several university officials came out and listen to the protesters.

Kent Fuchs, the university’s president, sent an email to students last week that he posted on Twitter. Fuchs says no one at the university invited Spencer to speak and that he personally finds “the doctrine of white supremacy abhorrent and denounce all forms of racism and hate.”

Fuchs wrote that the university—a state institution—is “required by law” to allow Spencer to speak.

“If you are like me, I expect you are surprised and even shocked to learn that UF is required by law to allow Mr. Spencer to speak his racist views on our campus, and that we are not allowed by law to bill him for the full costs of keeping our campus safe, which exceed more than a half million dollars,” he wrote.

The group has also organized a “teach-in” on Tuesday that will have a “panel discussion with professors from UF” encouraging people to “come out and learn about anti-racism, anti-fascism and what we can do in the face of oppression.”

The No Nazis at UF protest is not the only one being organized. Another Facebook page, “Ignore Richard Spencer Day” argues that ignoring the white supremacist’s speech does not allow him to use the protests “as recruiting material.”

“Ignore this moron and go about your day as normal and let his voice go mute as no one will be listening,” the page reads. Approximately 2,200 people have indicated they plan to ignore Richard Spencer, while another 4,100 people are “interested” in doing so.