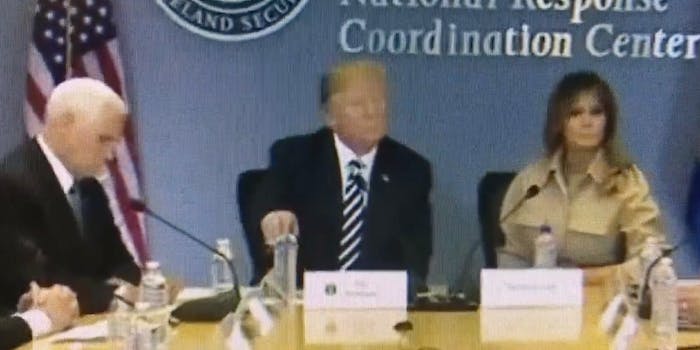 Trump moves water bottle, Pence does the same—and the internet has questions

During a meeting Wednesday, President Donald Trump moved his water bottle from the table to the floor. Without skipping a beat, Vice President Mike Pence, sitting to Trump’s right, did the exact same thing.

Why did Pence do this?

Is it some code?

Was there no more room at the table for the water bottle?

A secret code, at the end Trump places the napkin on his lap. Kind of signaling something to somebody?

Didnt you ever play that game as a kid where you mirror EVERYTHING your sib or friend does until they whollop you?

“If I had to guess, I’d say they were getting ready for a photo,” the commenter said. “Move the water bottles down just to make things look more professional. Makes for a cleaner looking picture.”

But what does that mean for Melania Trump? The first lady (who’s apparently back!) kept her water bottle, someone observed.

Pence and the Trumps’ meeting Wednesday was at the Federal Emergency Management Agency’s headquarters, where officials were briefed on what’s expected to be a heavier than normal hurricane season. There’s no word yet on when we can expect the next water bottle ballet.