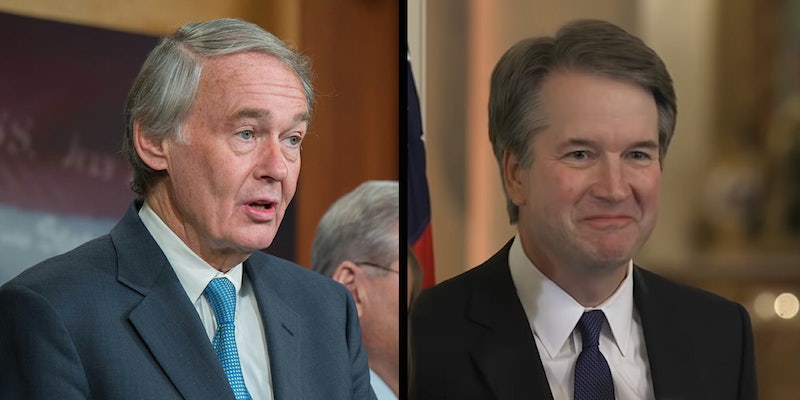 Pro-net neutrality Democratic lawmakers said on Tuesday that Brett Kavanaugh, President Donald Trump‘s pick for the Supreme Court, would “cripple” the internet protections should he be confirmed to the seat.

“Make no mistake Judge Kavanaugh would cripple net neutrality–not just this year, not just this FCC–but for decades to come,” Blumenthal said on Tuesday, later adding: “His position on this issue, as on so many others, is outside the mainstream. He is extreme in his views of the First Amendment protecting cable companies.”

“President Donald Trump has nominated someone to the Supreme Court who believes net neutrality rules are unconstitutional, someone who will take the side of big corporations over consumers,” Markey said, later adding: “If Judge Brett Kavanaugh becomes a Supreme Court justice, his fringe idea that internet service providers are entitled to First Amendment protection–and therefore can block certain content based on their preferences even though they are merely carrying other people’s speech–could go mainstream.”

“Mark my words. The fate of the internet will end up in the Supreme Court and if Brett Kavanaugh is there, he will kill net neutrality rules forever.”

The lawmakers also addressed the ongoing efforts in the House of Representatives to use the Congressional Review Act (CRA) to overturn the Federal Communications Commission‘s (FCC) decision to rescind net neutrality rules last year.

“The CRA effort is not over in the House, it’s not over by any means–we have until the end of the year,” Gigi B. Sohn, a distinguished fellow at Georgetown Institute for Technology Law & Policy, said. “Meetings are still going on and there were a lot of activities that went on during the recess and continue to go on during the recess. Anybody who tells you the CRA effort is over are not paying attention.”

The group of senators, advocates, and lawmakers said 27 senators and 76 House members signed an amicus brief in the Washington D.C. Circuit Court of Appeals in support of the lawsuit brought up against the FCC by attorney generals from nearly two-dozen states challenging the agency’s net neutrality repeal.

Eshoo pointed to reports of Verizon throttling internet speeds for firefighters in California to argue in favor for of the need for the protections.

“Those protections were strong, they were legally sound, they were upheld by the courts, they were carefully designed to prevent the largest internet service providers from throttling… or blocking content,” Eshoo said. “The need for these protections has really been made clear since the months they were repealed.”