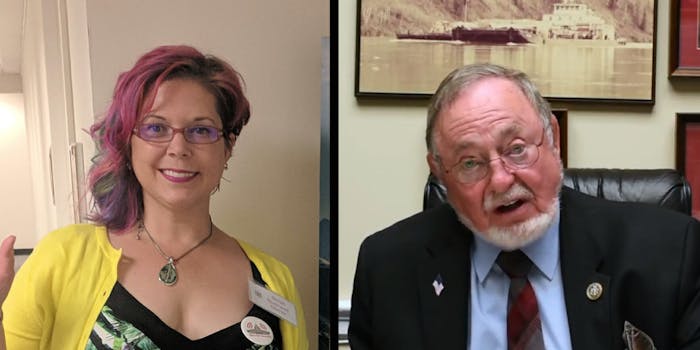 She felt the congressman misled her.

The Alaska woman who claims Rep. Don Young (R-Alaska) promised her he would support the effort in the House of Representatives to reinstate net neutrality protections says she is “disappointed” that the lawmaker has decided not to sign a discharge petition associated with it.

Late Tuesday, Young’s office told the Daily Dot the congressman would not sign a discharge petition, the first mechanism needed before the House can vote on a Congressional Review Act (CRA) that aims to overturn the Federal Communications Commission‘s (FCC) controversial decision to rescind net neutrality rules last year.

The announcement came hours after Jennie Stewart, the owner of CustomMousePad.com, said she met with Young in late June, where he made a “verbal commitment” to support the CRA and at one point told her “I don’t know why anybody would vote against this.”

Young’s spokeswoman said the congressman feels a discharge petition was “not the best option” and preferred that net neutrality be tackled “by an act of Congress.” The spokesperson added that the congressman feels “consumers must have the freedom to access websites and applications, and use internet-connected devices, without being blocked or slowed down.”

After getting the necessary votes on the discharge petition, the House would be able to vote on a CRA similar to the one passed by the Senate earlier this summer. The CRA needs a simple majority to pass in the House.

The turnaround from what she was told at the meeting to Young’s statement was “disappointing,” Stewart told the Daily Dot late Tuesday.

“I was really shocked and excited, actually, about Rep. Young’s willingness to do what was right for small business folks and his constituents rather than the folks that I know have a lot of money in lobbying,” Stewart said of her June meeting with Young, later adding: “Given the emphasis with which he said he would support it, and said he would sign onto the discharge petition, his opinions were not very grey… That statement that was issued… was not reflective of the discussion we had and the conclusions we came to.”

Here's the statement from Rep. Young's office in full: pic.twitter.com/EIwsbZazdt

Stewart said she spoke with Young during their meeting about possible legislative solutions to net neutrality, but implored him that the discharge petition and CRA were needed before any law could be argued in Congress. She said the lawmaker “seemed to agree” with her during the meeting.

But after Young’s office said he would not sign onto the discharge petition, Stewart said the feeling of “excitement” she felt after her meeting with her representative in June was gone.

“It’s quite disappointing to feel like you were given a promise—the caveat is of course they are a politician—but I think as someone who is not a politician, there is an expectation of if you profess your support for something then you do support it. Not that you profess your support for something in one audience and not another audience, which of course the political part that most of us don’t operate in.”

Meanwhile, Fight for the Future, an internet rights group, blasted Young’s decision not to sign onto the discharge petition.

“Congressman Young’s statement… is outrageous,” Sarah Roth Gaudette, the executive director of the group said in a statement. “I was stunned to see him trot out those tired, old ISP talking points, and unapologetically break his promise to sign the net neutrality CRA—a promise he made to an Alaska business owner that traveled nearly 10,000 miles to speak with him face-to-face in D.C. Nothing in his statement justifies breaking his promise, and Alaskan internet users are going to be furious. It’s clear Congressman Young has been bought and paid for by the country’s ISP lobby. Hell has no fury like an internet scorned, and we’ll make sure any member of Congress who tries to pull a stunt like this pays the price before the November election.”

“Rep. Young’s reversal on the discharge petition is extremely disappointing. Young had the opportunity to define himself as a hero on this issue before returning home to Alaska for recess, by signing the discharge.”

“There’s still time for Young to do the right thing and join other Republicans in the House and Senate who have supported the CRA. Demand Progress will continue to mobilize our members until Young and other representatives have signed the discharge to restore crucial open internet protections for their constituents.”

Fight for the Future, Demand Progress, and Free Press Action Fund will hold a protest outside of Young’s office in Anchorage, Alaska, on Wednesday night.