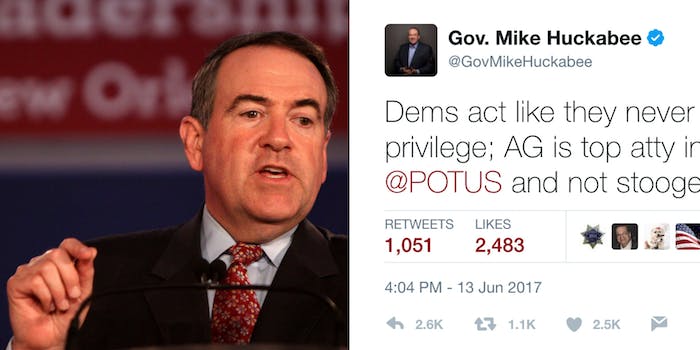 Mike Huckabee does not know what the attorney general does

That's not how it works, governor.

As Sessions repeatedly refused on Tuesday to answer senators’ questions regarding conversations he had with President Donald Trump, former Arkansas Gov. Mike Huckabee revealed a woeful misunderstanding about what the attorney general actually does.

Dems act like they never heard of atty/client privilege; AG is top atty in Exec branch; serves @POTUS and not stooge of Congress.

Huckabee’s inaccurate tweet came as Sessions testified before the Senate Intelligence Committee concerning Russia‘s attempts to interfere in the 2016 presidential election and other related topics. Facing questions from Democratic members of the committee regarding his conversations with Trump, Sessions refused to answer on the grounds that it would violate the president’s constitutional right to invoke executive privilege at some later date. (That reasoning itself is hotly disputed.) As Huckabee appears to have understood it, Sessions was invoking attorney-client privilege to avoid revealing their discussions.

But Sessions is not Trump’s attorney, as Huckabee implies. (That role is filled by White House counsel.) Instead, Sessions is the top public attorney in the United States, serving the people, not the White House. And the internet was quick to let him know.

Fact check: The Attorney General is not the president’s lawyer. https://t.co/WdLAd8zg48

the president has a private attorney and that's not what the attorney general does and you are very dumb https://t.co/udyGAI9p6L

The attorney general is not the president's lawyer. The White House counsel is who represents the White House. Buy a civics book. https://t.co/KHRjhQhPtF

Needless to say, this is incredibly wrong https://t.co/CeN7srckgI

The Attorney General serves the people of the United States of America.

A former Republican presidential candidate but no longer in office, Huckabee has direct ties to Trump’s White House: His daughter, Sarah Huckabee Sanders, is the White House’s deputy press secretary.