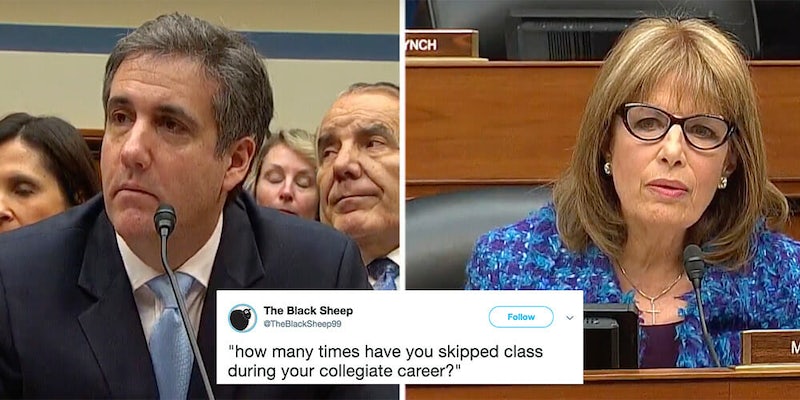 Michael Cohen testimony inspires meme that will have you saying ‘more’

Michael Cohen, the former lawyer for President Donald Trump, spent long hours on Wednesday testifying before Congress. As the internet audience hung onto his every word, one back-and-forth with Rep. Jackie Speier (D-Calif.) stuck out and became an instant Twitter meme.

Amid other questions, Speier asked Cohen: “How many times did Mr. Trump ask you to threaten an individual or entity on his behalf?”

A clip of the exchange floated around Twitter with users interjecting their own questions to which the answer is “500. Probably.”

"how many times have you watched gaga and bradley cooper perform shallow?" pic.twitter.com/I4QHbn43i8

"how many times have you skipped class during your collegiate career?" pic.twitter.com/TSBz5TmtRL

"How many times have you sloppily eaten shredded cheese straight from the bag after midnight?" pic.twitter.com/yax5bg0DFw

The meme seemed to especially resonate with sports fans.

How many times have you rewatched the #Eagles win the Superbowl?

“How many times did the Mets let you down last season?”
pic.twitter.com/2a2q0uhBBk

The rest of Cohen’s response to Speier clarified how he said he “threatened” people and entities on Trump’s behalf.

“And when you say threaten, I’m talking about with litigation or an argument with … a nasty reporter that is writing an article,” Cohen said.