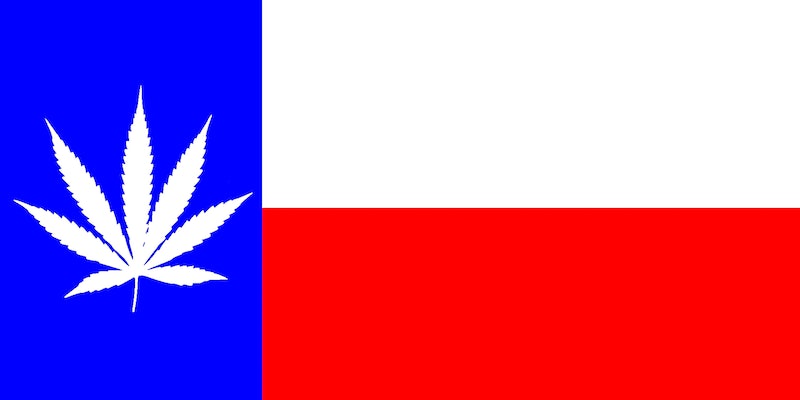 In Texas, the march toward marijuana legalization inches forward.

The possibilities seem endless in a place as big as Texas—a state where you can you can buy guns and groceries in the same trip, or easily and legally purchase exotic animals.

Still, in all but one county, possession of two ounces or less of marijuana can result in a misdemeanor charge, up to 180 days in prison, or a fine of up to $2,000. Four or more ounces is a federal offense punishable by up to two years in prison. Could that soon change?

Safe to say, it’s taken the legislators in the Lone Star State a little too long to catch up to public opinion. With the passage of new medical marijuana policy, however, the Texas legislature isn’t as far away from legalizing weed as it would seem.

In September 2017, the Texas Compassionate Use Act, Texas’s first small medical marijuana victory, is set to become viable law thanks to the exhaustive efforts of lobbying groups across the state.

The Compassionate Use Act allows patients with epilepsy access to low-THC marijuana and CBD oil, both of which have been proven to prevent seizures and replace other epilepsy drugs that come with nasty side effects. Texas Gov. Greg Abbott, who signed the bill into law in June 2015, said it would provide “healing and hope for children,” although he reiterated that its signing does not open the door for recreational marijuana use in Texas.

Heather Fazio, the Texas political director for the Marijuana Policy Project, said that despite Abbott’s show of support, the regulatory nature of this legislation does virtually nothing to help the very few patients that it claims to benefit.

“While the passage of this legislation was monumental in that the Texas legislature acknowledged cannabis as medicine, the existing program is unreasonably restrictive,” Fazio says.

According to the legislation, the state will only grant permission to patients who have “intractable epilepsy,” meaning they must have already exhausted two other prescription drug options with no success. Not only that, patients must also receive official prescriptions for cannabis from two state-licensed physicians before they can access treatment.

Medicinal cannabis has been proven to help adults and children by reducing seizure frequency regardless of whether their condition is “intractable” by the Texas definition. One study conducted this year showed a whopping 90 percent of epilepsy patients reported success using cannabis products rather than other seizure medication.

In the 28 other states where medical marijuana programs exist for patients, patients have to go through a formal process to be certified to use medical marijuana. Since it’s illegal under federal law to prescribe cannabis, patients can receive recommendations and certifications directly from a physician, enabling them to then seek out legal dispensaries. But under the Texas Compassionate Use, “recommendations” and “certifications” are not technically the same as a “prescription.”

For Fazio, the flawed language in the bill is perhaps the most problematic in that it doesn’t protect doctors. If the bill’s framing stays as it is now, Texas physicians are required to “prescribe” cannabis—which is both illegal and puts doctors in danger of losing their DEA registration.

“This is all legal semantics, and it’s kind of annoying,” Fazio says. “But it is important so that doctors have the confidence they need to move forward with getting their patients access to this medicine that can help them.”

In recent years, Texas has had hints of tiny weed victories across the state—Houston’s Harris County, for instance, is currently the only county in the state that allows offenders caught with four ounces or less of the drug the option to take a $150 “cognitive decision” class rather than walk away with a misdemeanor charge on their record as part of new county legislation passed March 1.

In 2015, State Representative David Simpson (R-Longview) submitted HB 2165 in support of recreational marijuana use. A Tea Party-backed Republican, Simpson made a case for a traditionally liberal issue with a deeply conservative, unexpectedly religious backbone: weed, Simpson argued, was made by God. And a righteous God doesn’t make mistakes.

“I’m especially cautious when it comes to laws banning plants,” Simpson writes, “I don’t believe that when God made marijuana he made a mistake that government needs to fix.”

As the Compassionate Use Act’s Sept. 1 implementation date approaches, the state is required to issue a minimum of three cannabis business licenses by the end of April. Until then, two companion bills, HB 2107 and SB 269, are in committee pushing for the expansion of both the language and scope of the Compassionate Use Act. If passed, the bills will allow patients to access the medicine they need without a hitch while assuring that Texas physicians are protected.

“It’s allowing them access to this medicine that can greatly improve their quality of life and decrease suffering,” Fazio says. “And ultimately, give them the medicine that can help them in lieu of the pharmaceutical drugs that for many have proven to be dangerous and addictive.”