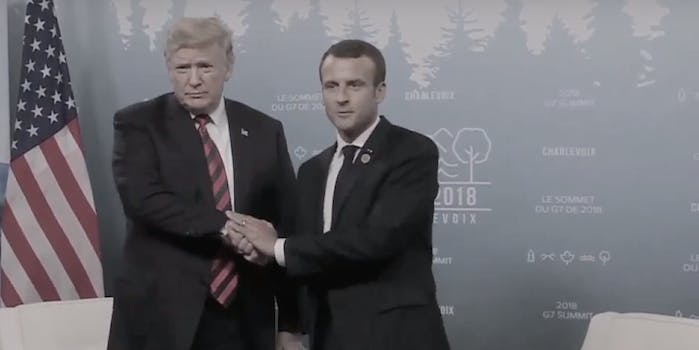 We all know that President Donald Trump loves a good handshake—and, boy, did French President Emmanuel Macron give him a good one at the G-7 summit on Friday.

A photo taken by senior Reuters photographer Leah Millis of the president’s hands after they greeted each other shows that Macron left a thumbprint on President Trump’s hand.

The imprint of French President Emmanuel Macron's thumb can be seen across the back of Trump's hand after they shook hands at the G7. Great frame from ⁦@LeahMillis⁩ pic.twitter.com/VA8RlkYX8a

Of course, folks on Twitter jumped at the opportunity to make some pretty punny jokes about the handshake.

This whole handshake thing has gotten out of hand.

They must have discussed a pressing matter.

I've got to hand it to him.

Would that be considered a #wellplayedhand

There’s something appealing about that Macron lad, but I can’t quite but my finger on it.

Less funny folks on Twitter pointed out that it doesn’t seem healthy that Trump’s hand could be so easily affected by a handshake. Some said it could be a sign of dehydration, poor blood circulation, or edema—a condition characterized by an excess of watery fluid collecting in the cavities or tissues of the body.

Not necessarily meaning Macron gripped his hand hard. He may have just had a firm but polite grip however the effect to Trumps skin tone, coloration and tissue is not a good health indicator.

I had the same thought – also maybe dehydration. Hard to tell from the pic

Those hands have never seen a callus, I'm guessing. That is some serious edema going on there, though.

The two presidents are currently at the G-7 Summit, which is a conference held by the Group of Seven, consisting of the U.S., France, Canada, Germany, Italy, Japan, and the United Kingdom. Hosted in Canada, the summit plans to discuss domestic and international priorities, including “to strengthen the middle class, advance gender equity, fight climate change, and promote respect for diversity and inclusion,” according to the Canadian prime minister’s website.

French Finance Minister Bruno Le Maire, however, has been referring to the summit as the G6+1, as a way to describe the isolating and tense relationship between the U.S. and the rest of the countries—especially since Trump has been advocating to reinstate the G-8 and effectively re-invite Russia to the summit. Russia was expelled in 2014 after it annexed Crimea.

Trump and Macron have quite the history of firm handshakes. In March 2017, when the two met for the first time at the U.S. ambassador’s residence in Brussels, they shared an awkwardly long greeting until their knuckles turned white. Later in July 2017, Trump shook Macron’s hand for approximately 25 seconds as he ceremoniously made his exit from Paris. Many see Trump’s intense handshakes to be a power move on his part, while Macron’s response could be a sign he doesn’t plan to back down from the U.S. president anytime soon.