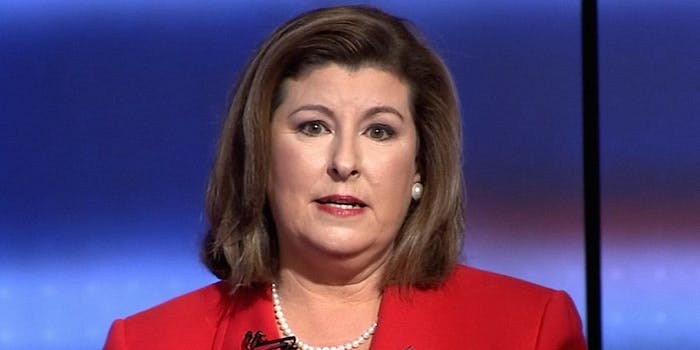 Georgia's high-profile special election is about more than Democrats' chances in 2018.

It was a moment of truth for Karen Handel.

The Republican, who is currently campaigning for Tom Price’s vacated seat in Georgia’s 6th Congressional district, was questioned about her stance on LGBTQ rights by a conservative mother with a lesbian daughter. Handel, a former executive at the breast cancer foundation Susan G. Komen, has repeatedly voiced her opposition to same-sex couples adopting children. During a meet-and-greet atWright’s Gourmet Sandwich Shop in Dunwoody, Georgia, last Friday, the constituent asked Handel, “What protections do I have for [my daughter] having a family in the future, wanting to adopt a kid?”

Placing her hand on her chest, Handel responded, “I have to be honest—my faith calls me to a different place on the issue.”

Handel, who has opposed LGBTQ equality throughout her career, stands in stark contrast to her Democratic opponent in a close election viewed as a referendum on the Trump administration. The Republican is trailing progressive challenger Jon Ossoff by nearly two points in polls conducted on the day of the Georgia runoff election. The 6th district, which consists of suburban voting blocks north of Atlanta, is reliably conservative. A strong showing for Ossoff bodes well for Democratic chances in the primary election. Liberals will need to flip 24 seats held by the GOP to take back the House of Representatives.

President Trump, realizing the symbolism of the Georgia elections, has repeatedly tweeted his support of Handel—while also spelling her name wrong on one occasion.

The president, who needs a win during a fraught debate over his Obamacare replacement bill, tweeted on Tuesday morning that Handel would “fight for lower taxes, great healthcare, [and] strong security.” Just as polls opened, he called her “a hard worker who will never give up.” Trump has also stated that Ossoff, who has campaigned against “wasteful” spending inCongress, “wants to raise taxes and kill healthcare.”

A great deal distinguishes the two candidates. Handel served as Georgia’s Secretary of State from 2007 to 2010, when she ran an unsuccessful bid for governor. Ossoff, at just 30, is a political newbie. He was a documentary filmmaker before entering the congressional race.

But perhaps there’s no issue that divides the two more than LGBTQ rights. Appearing at the Atlanta Equality March on June 11, Ossoff gave a rousing speech in which he told queer and trans voters, “You will be able to count on me to stand up for you every day.”

Handel, meanwhile, signaled during her failed bid for governor that she would outlaw same-sex adoptions if elected.

During a 2010 interview with WXIA-TV, she repeatedly dismissed questions about her LGBTQ rights stance. (She frequently laughed during the interview.) Telling the Atlanta news station that “marriage is between one man and one woman,” Handel claimed that having parents isn’t in the “best interest” of children. She also claimed that, as governor, she would “consider” passing legislation that limits adoption to heterosexual couples.

Nearly every reputable survey on the subject has shown that children raised by same-sex parents fare no differently than children from other families. Although they may face some discrimination and bullying at school because of their family makeup, numerous studies have shown that these kids actually outperform their peers. A 2014 report released by researchers at the University of Melbourne found that the children of gay parents score better “than the general population on measures of general health and family cohesion.” Lesbian couples’ kids have been found to perform better on standardized tests.

The gay adoption issue isn’t Handel’s only objectionable component of Handel’s platform. She also bragged in the 2010 interview that as a member of the Fulton County Board of Commissioners in Fulton, Georgia, she opposed domestic partner benefits. She is also against civil unions and, of course, same-sex marriage.

But following the Supreme Court’s 2015 decision on Obergefell v. Hodges, these issues are a matter of “settled law,” as Trump himself has stated. Adoption is still under debate.

Although the SCOTUS ruling allowed same-sex couples to have the same marriage benefits as their heterosexual peers, numerous states have chipped away at those recently won rights. In 2017, three states have passed legislation allowing faith-based adoption agencies to turn away LGBTQ couples due to their “sincerely held” religious beliefs. These include South Dakota, Alabama, and most recently, Texas. On June 15, Gov. Greg Abbott signed into law House Bill 3859 after a legislative session marked by constant attacks on Texas’ LGBTQ community.

HB 3859, which prohibits the state from taking action against any adoption or foster care agency that acts in accordance with its values, could have sweeping effects.ThinkProgress noted that the bill could be broadly applied, affecting “group homes, counseling services, care for abused children, and other resources for children with complicated family situations.” The bill could also be used to turn away Jewish, Muslim, and interfaith couples.

The people who will be harmed most by these proposals are children, contrary to what Handel may believe. Currently, there are an estimated 1,174 children who need placement in South Dakota, and Texas’ system is so overcrowded that foster kids are sleeping on cots in office spaces that are not equipped to live in. The state simply doesn’t have enough beds. The dire state of foster care in Texas, where the number of children without homes has doubled in recent years, has become a source of constant strife for the state. A 15-year-old was run over by a minivan earlier this year after fleeing her care center.

Advocacy groups estimate that same-sex households are four times more likely than heterosexual ones to adopt, and bills like HB 3859 will only make the problem worse. Georgia mulled passing its own anti-LGBTQ adoption law in May. If the Empire State of the South were to follow through, it would become the seventh state with such legislation in place.

As a member of the House of Representatives, Handel will have no say on which bills are pushed in the state legislature. But in a race with a great deal of symbolic power, the decision that voters make today at the ballot box will say a great deal about Georgia’s future, as well as that of a country that remains divided on LGBTQ issues. Will voters choose the progressive supporter of equality or the conservative who has spent her career fighting against equal rights for same-sex families? The answer may tell onlookers a lot about America come 2018—and thereafter.