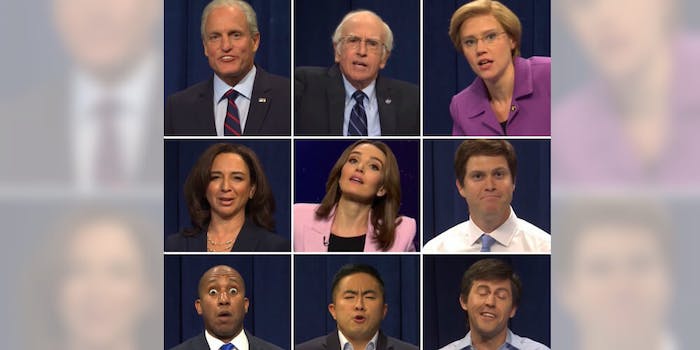 With so many Democratic candidates still in the primary race, it’s easy to lose track of one or two every now and again. But in a Saturday Night Live sketch that went out of its way to include a plethora of remaining candidates, specifically to make fun of how crowded the debate stages continue to be, some people are upset that Julián Castro didn’t get his own SNL doppelgänger.

At first glance, it might be easy to overlook Castro’s absence as no big deal. He’s generally polling lower than the candidates who were parodied in the skit, with the exception of Williamson, who is easy fodder for a sketch mocking the candidates’ most ridiculous qualities, with her crystals and warnings of “dark psychic forces.”

But as the only Latino candidate in the primary, many feel like Castro’s exclusion may have had more to do with SNL’s unwillingness to bring in a brown actor to play the role.

“Interesting that @nbcsnl decided to cut one candidate out of this sketch. Could you not find a Latino actor to play @JulianCastro?” Castro’s press secretary, Sawyer Hackett, questioned on Twitter.

Interesting that @nbcsnl decided to cut one candidate out of this sketch. Could you not find a Latino actor to play @JulianCastro? pic.twitter.com/eWBgX4CDV7

While SNL generally relies on its main cast and host to fill roles in skits, election coverage is often an exception to the rule. Even in Saturday night’s town hall sketch, both Harris and Sanders were played by non-cast members, Maya Rudolph and Larry David respectively.

But the late-night comedy show has often come under fire for having too many white cast members (especially men) and being too casual about having non-white and vaguely tan cast members jump between portraying various races, rather than just hiring a more diverse cast to begin with.

“SNL refuses to admit brown people exist and the news media is supposed to report FACTS yet can’t make sure the correct twin is covered,” comedian Cristela Alonzo tweeted.

The erasure of Julian Castro on SNL last night and the constant confusion of the twins in news shows us the true problem of representation.

SNL refuses to admit brown people exist and the news media is supposed to report FACTS yet can’t make sure the correct twin is covered. 🤷🏽‍♀️

There was no shortage of frustration online over Castro’s exclusion, and it wasn’t only people who work for him and comedians who expressed their concerns.

“The media has tried to erase the Latino candidate while fluffing up small town mayor Pete Buttigieg,” one user pointed out. “@JulianCastro was mayor of a town of 1.4 million. Buttigieg mayor of town of 150,000.”

“Maybe next season @nbcsnl should consider casting a male Hispanic comedian,” another suggested.

This is not finding something to be angry about. The media has tried to erase the Latino candidate while fluffing up small town mayor Pete Buttigieg. @JulianCastro was mayor of a town of 1.4 million. Buttigieg mayor of town of 150,000

Complete BS move by @nbcsnl to not include anyone to play @JulianCastro. There was really no excuse here. Even when it comes to parody, Julián, the only Latino candidate in the race, gets no love. Seriously, if SNL needs names, we got em. #NoMameshttps://t.co/a1oBnAtRSu

Maybe next season @nbcsnl should consider casting a male Hispanic comedian so they can incorporate Hispanic political leaders in their skits like @JulianCastro. Way to be inclusive SNL 😒

Oh yeah let's definitely give Marianna Williamson, a living, breathing horoscope, more exposure than @JulianCastro, the only Latino candidate running for office and the youngest cabinet member to serve under Obama.

Get your shit together @nbcsnl https://t.co/C72aXTvzMP

And still, others pointed out that including Latinx voices is particularly imperative in the current political climate, with the Trump administration shutting out immigration attempts and Trump himself previously referring to Mexicans as rapists and drug-dealers.

Representation matters @nbcsnl.
Why wasn't @JulianCastro featured in the Impeachment skit? Latino voices are necessary, especially given the Trump-GOP rhetoric. Not a joking matter https://t.co/neCWNDimGc

But there’s still time–oh God, so much time–left in the primaries. So if SNL really wanted to step up and make sure Castro is included in a future political sketch (or five), it certainly can. And while there are undoubtedly plenty of talented Latino comedians who could play him–even if SNL has mysteriously never been able to find any of them–Natalie Montelongo, Castro’s national political director, already has someone in mind.

“We heard from @Vegalteno that Lin-Manuel Miranda was ready to step into that role,” Montelongo tweeted.

It’s disappointing to see @nbcsnl erase @JulianCastro, the only Latino candidate in this race.

PS — We heard from @Vegalteno that @Lin_Manuel was ready to step into that role🕴🏽🕺🏽 pic.twitter.com/n57KFr9dGd