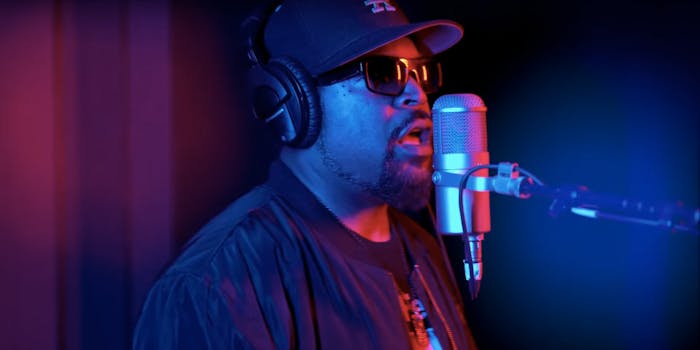 Ice Cube is back with a politically charged song called “Arrest the President” wherein he refers to President Donald Trump as the “Russian intelligence” and “Satan.”

In his lyrics, Cube explicitly states his contempt for Trump. Cube raps, “Arrest the president, you got the evidence / That [N-word] is Russian intelligence,” referring to the investigation into Russian interference in the 2016 election.

The rapper also mocks Trump’s skin tone and says the president is evil: “Did you know the new white was orange? / Boy, you’re showing your horns.”

Cube had previously tweeted a teaser of the song on Election Day, tweeting to his 4 million followers, “Cuffs are ready … Get out there and vote.”

He finally dropped the song on Friday, and people on Twitter are obsessed.

Man cant wait for the album! 🔥

Some even posted memes. A couple were of Thor smashing his hammer down to illustrate the power of Cube’s beat drop.

The main chorus repeats the title of the song, “arrest the president” 12 times, making it hard to get out of your head once you push play.

“Arrest the President” is the latest release from his upcoming album, Everythang’s Corrupt, which drops Dec. 7.