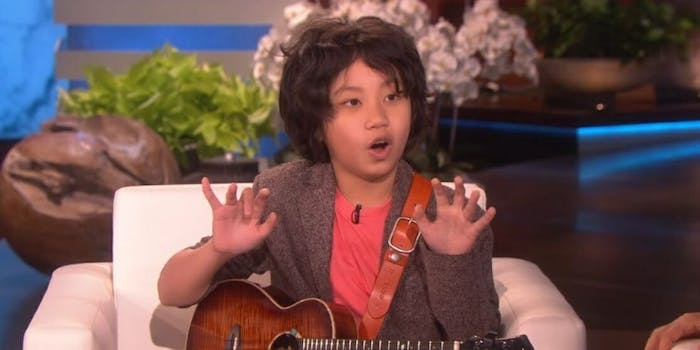 You have to check out his Michael Jackson covers.

Feng E is a wonder on the ukulele. On his YouTube page, more than 25,000 people subscribe to see how he’ll wow them next. Every few days, whether he’s sitting in the back seat of a car or hanging out on the street, he obliges them with some kind of incredible cover song.

Recently, a few of Feng E’s Michael Jackson covers have gone viral, including this one of “Smooth Criminal”—it has more than 60,000 views.

And this one of “Beat It,” which was taken on the streets of London (in the middle of his performance, somebody appreciatively shouted “Beast!” at him).

But his most most-watched video is this cover of the Cranberries hit, “Zombie,” shot only a few days after the untimely death of lead singer Dolores O’Riordan. It’s accumulated close to 400,000 page views, and it’s a beautiful version of the 1994 hit that is tinged with melancholy. It also led one YouTube commenter to write, “I don’t believe in reincarnation, but stuff like this makes me wonder. I feel like this kid is an old soul.”

For those who like the classics, Feng E, a native of Taiwan, has plenty of Beatles covers.

If you enjoy listening to college radio, here’s his take on Yo La Tengo.

Feng E got his first big taste of American exposure when he appeared on Ellen DeGeneres’ talk show earlier this year—she received criticism afterward for mocking him when he was speaking his native language. During their interview, he said he began playing the ukulele when he was about 5 years old when his father thought his son’s fingers weren’t flexible enough (you can blame his bad handwriting for his father’s theory). So, he told Feng E that unless he began training on the ukulele, the father would not play Lego’s with his child.

Or as one YouTube commenter wrote, “Feng E—the only man in the world who can shred on the ukulele. Great !!!”

Except Feng E isn’t a man. He’s a preteen with a predilection for rocking out hard on the ukulele, and YouTube certainly has noticed.