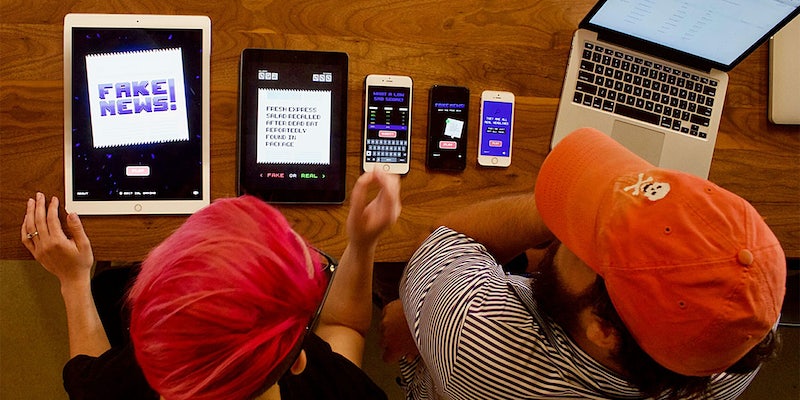 Test your fake-news ninja skills with this free iOS game

Can you score better than the average news reader?

President Donald Trump might call any news he doesn’t like “fake news.” But the ability to spot the real kind—false and misleading news stories meant to warp your perception of the news—is incredibly important, which is why one team made a game to sharpen your skills.

The results were somewhat surprising, according to Josh Strupp, a project manager for the game and marketing coordinator at ISL.

“The game was inspired by our internal collective frustration,” Strupp told the Daily Dot in a phone interview. “We said we need to create something that helps people address fake news, but in a way that feels familiar. So, obviously, our mind went straight to a game.”

Fake News: The Game, which is modeled like an 8-bit retro arcade game, shows players hundreds of headlines from the around the web and asks them to guess if they’re real or fake. Strupp said players had the most trouble with headlines concerning technology, business, civil rights, health, and media.

“I think there is an objective truth to be found in the news and the news cycle,” Strupp said. “Right now, it’s very hard to find. Especially in the way the internet works and, therefore, how the media works, you can’t stop people from pushing out news that goes along with their own agenda rather than what goes along what is based in facts. But what you can do is attempt to train people to snuff out the stuff that isn’t based in facts and try and inform.”

Roughly half of those who played failed to identify fake news from real news during their first time playing the game, according to data compiled by ISL.

“The idea being that if you have some sort of training mechanism, some sort of game or something similar, then people can become more familiar with the patterns of fake news,” he said. “That’s a theory that could be explored, but it’s a starting point.”

Strupp said he felt the game was a better way to teach people how to spot fake news better than, say, an infographic or video because it is interactive and takes out any internal bias someone might have toward believing one headline over another.

“If you were to put different information into a medium that all of us play—no matter what our political, social or economic beliefs are—then maybe you can break through that barrier and inform someone of something they previously wouldn’t have found in whatever news sources they tend to go to,” Strupp said.

You can play Fake News: The Game by downloading it in the Apple App Store on any iOS device and even use it as an Amazon Alexa skill. Strupp said depending on the game’s success, they may create an Android version.

Learn more about it here. You can also read more about the team’s findings here.