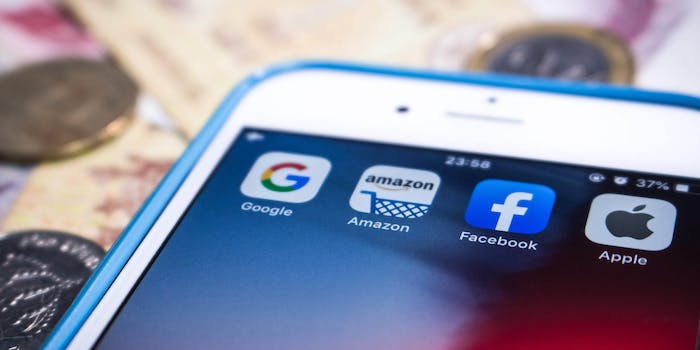 The pledge is similar to one about net neutrality.

A number of internet rights and activist organizations are asking 2020 presidential candidates to pledge to break up big tech companies like Amazon, Google, and Facebook.

The groups, which include Demand Progress and several others, are asking people to sign a petition that demands that “all candidates recognize that big tech monopolies are a serious threat to our democracy and economy.”

“The future of our democracy and economy shouldn’t be left to the whims of a few reckless billionaire CEOs and their tech monopolies,” the petition reads, adding: “Big tech monopolies like Amazon, Facebook, and Google are too big to be managed responsibly. That’s why we have been fighting for the government to #BreakUpBigTech.”

The petition asks for 2020 candidates to commit to appointing Federal Trade Commissioners and officials in the Justice Department who would make “breaking up big tech a priority.”

“Big technology monopolies like Amazon, Google, and Facebook provide useful services, but their immense power and control have damaged democracy and the global economy,” Salma Mirza, a senior campaigner at Demand Progress, said in a statement. “Everyone should be able to enjoy the benefits of digital technology and online commerce without having to sacrifice the wellbeing of our communities and democracy itself.”

The petition mirrors a similar one that asks for 2020 candidates to pledge to restore net neutrality and reject campaign contributions from telecom, among other things.

Some 2020 Democrats have already made their views on big tech known, though only one has gone as far as the petition asks.

Sen. Elizabeth Warren (D-Mass.) announced in March that she wanted to break up large tech companies if elected, saying that they have “too much power over our economy, our society, and our democracy.”

Others have also hinted at potentially looking at the companies, according to the Verge.