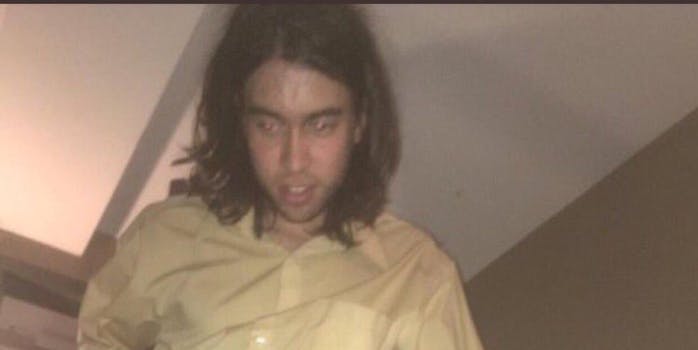 'I was joking around. It obviously isn't that funny anymore.'

Conservatives on social media have been floating an unflattering photo they’ve said is Democratic presidential candidate Beto O’Rourke as a younger man. In the photo, it appears the perhaps-drunken man has wet himself at a party. Many referred to the man as “Mr. Pissy Pants,” or “pissy pants” for short.

However, the man in the photo is not O’Rourke at all. It is Philadelphia-area rock musician Alex Giannascoli, known professionally as (Sandy) Alex G. And he did not wet himself.

“I spilled a beer on my pants,” Giannascoli told Factcheck.org, of the picture taken nearly two years ago backstage at a show in New York City. “I was joking around. It obviously isn’t that funny anymore.”

Giannascoli made fun of the ridiculousness of the situation on Instagram. The singer posted one of the memes made from the photo, with the caption: “I’M BETO ROBERT FRANCIS O’ROURKE I’M HERE FOR YOUR GUNS.”

People knowledgeable about Giannascoli thought it was funny.

All potential facts of the matter pushed aside, conservatives proceeded to take gratuitous shots at “pissy pants” O’Rourke.

Most of the “pissy pants” memes are related to O’Rourke’s stated desires to eliminate assault rifles, as part of his overarching plan to curb further instances of mass shootings, which included a buyback program. He recently doubled down on his stance to confiscate weapons in specific circumstances, calling out Senate Minority Leader Chuck Schumer (D-N.Y) for failing to act on gun violence.

Shut up pissy pants. You are getting nothing, zero, nadda. I have carried a weapon of war in the Marine Corps and an AR-15 isn't it. The Second Amendment is to protect us from people exactly like you…. hint ….government overreach.

O’Rourke has had no comment on the meme or photo.