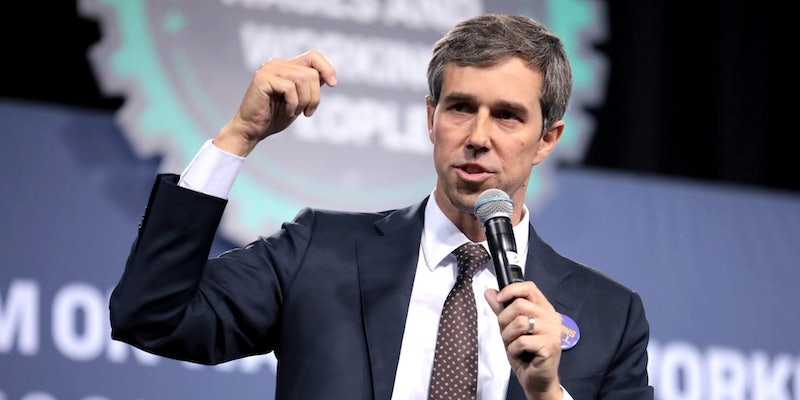 O'Rourke joins other 2020 hopefuls in criticizing the use of the technology in law enforcement.

2020 Democratic presidential hopeful Beto O’Rourke opposes the use of facial recognition technology in both immigration and policing, his campaign told the Daily Dot.

O’Rourke’s stance on the issue comes as other 2020 Democratic presidential hopefuls have talked about the technology, which is also facing pressure from digital rights and advocacy groups.

“Beto opposes the use of facial recognition software in both pursuing immigration offenses and policing,” a campaign spokesperson told the Daily Dot. “Beto believes the use of this software is an abuse of individual privacy, and has been shown to consistently make more errors for women and people of color than white men.”

“This is wrong,” O’Rourke tweeted in July. “As president I’ll prohibit DHS from using facial recognition to go after immigration offenses. Instead of abusing the privacy of those in our communities, we’ll provide pathways for immigrants to further contribute to society & the economy.”

This is wrong. As president I’ll prohibit DHS from using facial recognition to go after immigration offenses. Instead of abusing the privacy of those in our communities, we’ll provide pathways for immigrants to further contribute to society & the economy. https://t.co/QTHWOumhfj

Other 2020 Democrats have voiced their opinions about facial recognition technology.

Sen. Bernie Sanders (I-Vt.) called for an outright ban on the use of it by law enforcement as part of a criminal justice reform plan released last month.

Meanwhile, Sen. Kamala Harris (D-Calif.) stopped shot of calling for a ban, instead saying she hoped to work with groups to “institute regulations and protections” on facial recognition technology that “does not further racial disparities or other biases.”

Sen. Elizabeth Warren (D-Mass.) said she would establish a task force to “establish guardrails and appropriate privacy protections for this and other surveillance technology, including the use of facial recognition technology and algorithms that exacerbate underlying bias” as part of her criminal justice reform plan.

These stances on the technology come as more than 30 activist groups and organizations have endorsed a push for a ban on the use of facial recognition by law enforcement groups.

Several cities including San Francisco; Somerville, Massachusettes; and Oakland, California; have also banned the use of the technology.