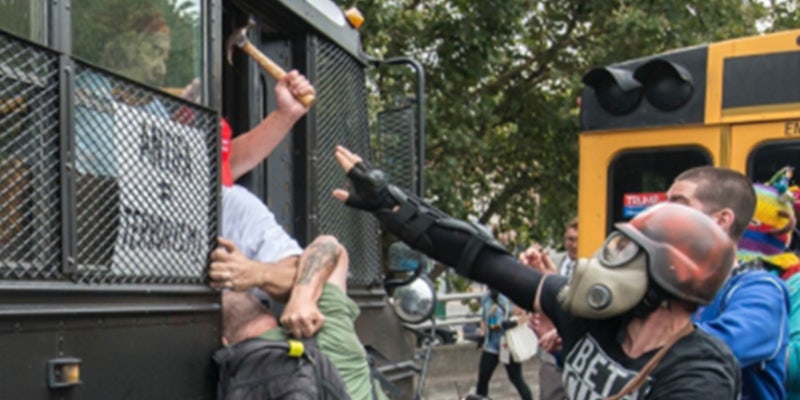 The magic of editing is helping people lie about who threw the first punch.

Over the past month, in response to right-wing outrage over a protest in Portland, Oregon, conservative legislators began trying to brand anti-fascist protesters (known as antifa) as a domestic terrorism organization. And strategically edited videos are helping them do just that.

Although the loose collective has long been a right-wing boogeyman, the chatter over antifa reached the halls of Congress and the Oval Office largely thanks to misinformation pushed online.

In July, when antifa members assaulted a reporter, Andy Ngo, a rumor swirled that he was hit with concrete-laced milkshakes. That turned out to be false, but it shifted the dialogue in conservative circles around the group.

In advance of a new right-wing gathering last weekend again in Portland, President Donald Trump echoed the concern that antifa would violently lash out.

Major consideration is being given to naming ANTIFA an “ORGANIZATION OF TERROR.” Portland is being watched very closely. Hopefully the Mayor will be able to properly do his job!

With eyes on Oregon, as the Proud Boys and Patriot Prayer again descended on the city, people were eager to share evidence that conformed to their narrative.

While the opposing groups were generally kept well apart, there were confrontations and skirmishes throughout the city. As various clips were posted and shared, distinctly different narratives took form highlighting the ease of spreading disinformation and propaganda. In fact, misinformation made it all the way up to the president’s favorite television show, Fox & Friends.

Even though he didn’t attend this time, Ngo was again involved.

It began, sort of, when antifa-aligned protesters were recorded attacking a bus carrying members of the violent right-wing militia, the American Guard.

A clip of one masked counter-protester throwing a hammer through the open door of the bus was used by Ngo as proof of antifa terrorism. The video has been viewed nearly 4 million times.

Antifa attacks people on a bus. They try to pull them out and hit them with a hammer. #PortlandProtests pic.twitter.com/JSkCE1Vrcy

Photo of one of the men on the black bus after he was beaten, maced and had a hammer thrown at his torso during the antifa attack. pic.twitter.com/XPK4z8IbgJ

But the conflict viewed from start to finish answers a question filling Ngo’s replies online: “Where’d the hammer come from, Andy?”

People linked videos from other angles, shared screenshots, and slowed down footage. As it turns out, the man Ngo identified as a victim brought the hammer into the conflict.

He can be seen swinging the hammer from the bus, and it is thrown back after being taken from him. While some have claimed the bus riders acted in self-defense, it is hard to see how they could feel more protected by removing the physical barrier (the door) between them and the counter-protesters.

In reality, a bus carrying hardcore fascist militia “American Guard” was passing some counter-protestors when it stopped at a light. After an exchange of taunts, members of American Guard opened their bus door and started attacking with hammers.https://t.co/T5XEBEUAuu

Answer the question, Andy: Who brought the hammer?https://t.co/ZVDej9Gz6u

This is missing some parts. Fixed it for you. Took this myself unedited on the phone I’m posting it on. pic.twitter.com/gQUEUbKZ1U

The propaganda machine moves fast, however, and it doesn’t like to fact check.

The edited clip of the bus confrontation was aired on Fox & Friends, Trump’s favorite show. The clip was further edited to show the conflict out of chronological order, clip out the right-wing violence, and highlight the hammer being thrown into the bus.

Fox & Friends airs a misleadingly edited video of anti-fascist protesters in Portland swinging a hammer at fascists. Fox omitted the part where the fascists opened their bus doors to start swinging at people with the hammer, which antifa then took from them. pic.twitter.com/Ff6Ycw8J44

Fox & Friends did not show or state that the hammer originally came from a person on the bus.

Other altercations filmed show the difficulty of parsing who was instigating violence and who was involved in de-escalation at the event. And both groups are, in the wake of the events, attempting to claim the moral high ground.

One skirmish was repeatedly described by right-wing commenters as antifa surrounding and chasing a protester and a person they varyingly described as a teenager or a 10-year-old girl.

Longer videos show a man in gladiator armor swinging a shield at antifa as they splash liquids on him, and yell “go home.” He was quickly identified as John Turano, also known as “Based Spartan” who has a well-documented and infamous history of violence at right-wing rallies.

The “10-year-old girl” with him was identified as his 24-year-old daughter, and screenshots emerged of a Facebook post he made saying he hoped his daughter would be beaten up.

His daughter told Vice in 2018 that she goes with him because “sometimes he gets a little crazy,” and she’s worried he will “blow up and do something he might regret.”

Oh. Here’s what was happening with Based Spartan that you saw me post part of from my angle up the street. Dude went looking for trouble downtown, found it, punched a storefront window, and ran away. Fascists want you to think this was an antifa assault. pic.twitter.com/jDzAY6sSbC

Another heavily shared story from right-wing accounts claimed an uninvolved random bike rider was “sprayed” by antifa and the two men who came to his defense were “beaten” with “no police in sight.”

Some even claimed the two men on foot were “random people“ antifa targeted for no reason.

In truth, the man on the bike was sprayed with silly string and identified as Gregory Isaacson, a Portland city employee who human records files show has made his coworkers of color feel unsafe and who has been previously arrested at right-wing demonstrations.

Antifa didn't "find" him. He deliberately provoked all day. Rode his bike into the middle of black bloc protesters. Sprayed in face? Yes… with silly string pic.twitter.com/DmFsmkK5Dd

Longer videos from other angles show that the “random men” threw the first punch, hitting multiple antifa members as well as a third person who was filming, from behind as they ran past before antifa began chasing and hitting them.

Those longer videos show antifa trying to de-escalate and that police were present and demanded the crowd disperse within minutes of the first punch being thrown.

Here's what happened when antifa sprayed silly string at a guy with a Pepe pin. He kept walking, saying nothing, but others followed. One threw an egg.

Escalated into a pro-Trump journalist getting hurt, skateboard and sticks etc as weapons. Cops didn't get involved. pic.twitter.com/KOQ3vCrKEg

A small brawl broke out as someone with alt-right ties named Greg Isaacson rode his bike through counter-protesters. Then someone intervened and this was the result. #PortlandProtest pic.twitter.com/mXlUUChXjX

Yet another incident involved a couple whom right-wing accounts described as elderly or older and described as being surrounded, attacked, maced, and left bloodied on the ground. It’s not clear from any videos who threw the first punch.

Videos show the couple repeatedly being surrounded but then given a path to leave.

When fighting breaks out, the man is quickly knocked to the ground and kicked repeatedly. Witnesses commented the couple was shouting homophobic slurs at people as they walked by. After the couple was escorted away by the police, the man was witnessed saying he’s “going right back after them.” True to his word, he left the police protection and again confronted antifa.

But instead of another fight, they were met by antifa who begged them to leave and ended up helping escort them to the hospital with the blessing of the Portland police.

Metheny and co are still looking for a fight, counter protest asking them to leave, they are still screaming but got real quiet when I mentioned they were calling people faggot. pic.twitter.com/tKcIlKOy9G

Same thing occurred later with pedestrian couple that opposed antifa but wasn't with a group.

I arrived after initial confrontation, but after bloodying the man and egging the woman, antifa tried to escort them out peacefully to avoid further violence. pic.twitter.com/gPZKZjYWhW

Even with evidence of far-right instigation, the movement will be blamed by people who want them deemed terrorists.