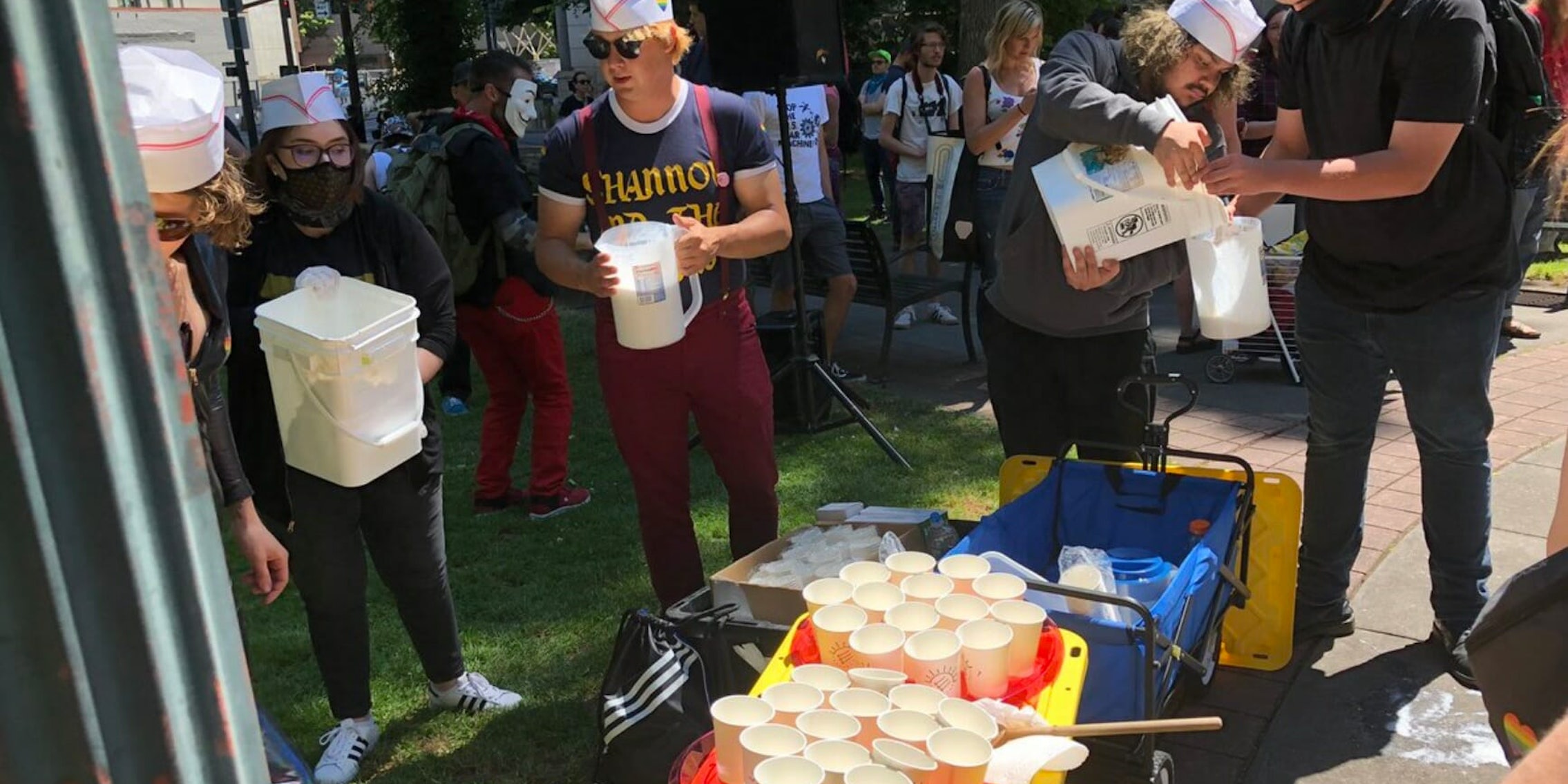 “We didn’t buy $800 worth of fancy vegan ice cream just to mix it with something gross.”

This was Pop Mob’s response to a question from the Daily Dot about whether the sweet treats the group handed out at Saturday’s protests in Portland, Oregon were laced with quick-drying concrete.

Chaos and violence at times broke out during the demonstrations of rival factions of political extremists affiliated with the Proud Boys and HimToo movement on one side and antifa counter-protesters on the other. Several assaults were reported, including that of journalist Andy Ngo; videos of the incidents were shared widely on social media.

During the protests, the Portland Police Department tweeted an alarming warning that some people were hurling milkshakes containing quick-drying concrete at people.

Milkshaking refers to the trend of dumping the beverages on far-right politicians and figureheads. Originally started by the British, the fad has recently crossed the Atlantic Ocean. Rep. Matt Gaetz (R-Fla.) is the first American politician who was reportedly milkshaked—though it’s probably more accurate to say that he was slushied. The phenomenon is frequently cited by conservatives attempting to paint the left as violent and unruly.

Pop Mob, an activist group that resists the far-right, was passing out milkshakes at the demonstration.

Predictably, the far-right jumped on the story of antifa hurling concrete milkshakes in Portland, with some claiming that people had actually been hit. One person referred to them as “Molotov milkshakes with Quicklime.” This doesn’t actually make sense. Molotov cocktails are explosive; Quicklime is used for making cement.

Cement can cause chemical burns

Lol its just milkshakes tho amirite??????

These people are violent psychopaths https://t.co/Sby3pR3qSA

This HuffPost writer @letsgomathias deleted this tweet celebrating Antifa’s “milkshaking” of a journalist.

The milkshakes were lined with quicklime/quick dry concrete mix and produce chemical burns, in addition to being heavy. pic.twitter.com/orQi1ikruv

While it is true that some milkshakes were thrown during the protests, there is no evidence that there was anything but frozen nondairy delights in those cups, nor has anyone claimed to have been hit with a cement milkshake.

Social media reactions to the hoax ranged from amused to appalled.

I have to admit I'm confused as to what the problem is with concrete milkshakes. They are delicious. pic.twitter.com/TUrsKUNHjB

The whole "concrete milkshake" fiasco is a good reminder that for leftists, there is no "correct" way to protest. People will just invent laughable bullshit, the cops will eagerly amplify it, and suddenly the national news is as full of shit as a forwarded chain email pic.twitter.com/KfXyaQP5r5

accidentally taking too many sips from the milkshake you forgot has concrete in it and breaking your toilet later :/

It was later revealed that the PPD based its warning on a single officer’s observations, reported Willamette Week staff writer Kate Shepherd.

The department further conceded that the only other piece of evidence was an anonymous email it received after it tweeted the warning. That email included a recipe for making the shakes with the following ingredients: “Soymilk,” “Quick Rete Cement Mix” and “Other Chemical Additives to cause long term injury and burns,” and concluded by saying, “We hope the piggy officers and proud boys enjoyed the shake back!”

Many were suspicious of this email’s origins, pointing out that it would be illogical to use pricey soy milk to make a milkshake weapon, and opining that it probably either came from a fellow officer or a far-right extremist.

That email they shared screams of false flag. Any actual evidence or injuries that indicate anything but a vegan milkshake?

PPD has been heavily criticized for spreading the rumor now widely believed to be false. As recently as this morning, even its tweets completely unrelated to milkshakes or Saturday’s protests have been thoroughly dragged. “Watch out for milkshakes laced with fast drying cement!” is a typical comment.

Via Facebook message to the Daily Dot, Pop Mob categorically denied that there was anything but milkshake ingredients in the 750 drinks they distributed on Saturday.

“There was, with absolute certainty, nothing in those milkshakes but plain coconut bliss and cashew milk, lovingly blended at a clean commercial kitchen a few blocks from the park by sweet volunteers, and then brought into the park in food safe buckets to be distributed for free to attendees,” they told the Dot.

Pop Mob called it, “a misinformation campaign blatantly manufactured by the Portland police to disrupt a thriving antifascist movement.”

And as of Monday, no one who drank the shakes had either fallen ill or turned to stone.