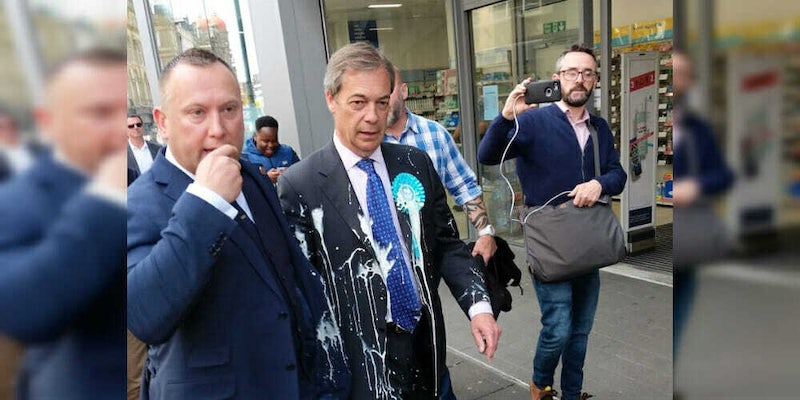 How milkshaking become a form of political protest—and a meme

The dairy drink is now a symbol for anti-fascism.

Milkshakes, a dairy treat often enjoyed in diners, have morphed into an anti-fascist symbol in recent months. Pouring milkshakes on people—an act known as “milkshaking”—is now a popular protest tactic. The drink became a massive topic of conversation last week, as right-wing figures and law enforcement officials in Portland accused Antifa—a network of leftist groups—of mixing milkshakes with quick-dry cement and battery acid. Suddenly, everyone in American political life seemed to be weighing in on milkshakes.

The conversation around milkshakes got to the heart of the public perceptions of antifascist activism. If the milkshake can be made into weapons, Antifa is violent. If milkshakes are a form of peaceful protest, then they can be considered a tool of non-violent resistance.

Here’s how the milkshake became a symbolic battleground between the radical left and the alt-right, and how milkshaking became a meme (not to be confused with milkshake duck).

How the milkshaking meme took off

There is an argument to be made that the origins of milkshaking really lie with “Egg Boy.” In March, Australian teen Will Connolly smashed an egg on the head of right-wing Aussie senator Fraser Anning. Like Robinson, Anning is known for his virulent bigotry, and specifically Islamophobia.

A teenager dubbed "egg boy" has become the talk of the internet after he threw an egg at an Australian politician who blamed Muslim immigration for the Christchurch terror attack | https://t.co/BvG85snWej pic.twitter.com/XSXMNUmvL1

For whatever reason, milkshaking took off in a way egging didn’t. Perhaps the ease of transport and the fact that it is easy to pretend that a milkshake is, say, a soda or a cup of water, makes it easier to wield.

In the weeks after the Robinson incident, milkshaking spread rapidly. Throughout the month of May, right-wing figures found themselves the targets of milkshaking incidents. Most notably, on May 16, a UK McDonald’s was asked not to sell milkshakes near an event featuring Brexiter and right-wing provocateur Nigel Farage.

And, of course, the brands got involved—a true sign that a meme has really made it big.

Milkshaking as an Antifa symbol

From there, anti-fascist organizers around the world embraced milkshaking. Milkshakes quickly became a common sight at all kinds of Antifa actions, which led to serious criticism about protest action.

Numerous publications ran essays about whether milkshaking was a violent tactic. The Conversation asked, “Is milkshaking a form of political violence?” The Financial Times argued: “We should be stirred by Nigel Farage’s milkshake.” Ricky Gervais tweeted that he finds it hypocritical that leftists concerned about speech don’t find milkshaking to be a violent act.

Left-leaning and anti-authoritarian publications pushed back in favor of milkshaking. The Guardian asserted that milkshaking isn’t political violence but political theater. The Atlantic mused, “Sometimes a milkshake is just a milkshake.” Leftist labor writer Kim Kelly even went as far as to offer her “perfect” recipe for an anti-fascist milkshake.

This rhetorical back-and-forth turned milkshaking into an even larger symbol in the political battle between the left and the right. This tension came to a head during a clash between fascist “Proud Boys” and anti-fascists last week in Portland, Oregon.

Nothing to see here, just Antifa bringing all the milkshakes to the yard. #Portland pic.twitter.com/5v5D1eElfF

As with all Antifa actions, the demonstrators used a diversity of tactics. Some were willing to use violence to meet fascists in the street, while others were not. Some activists brought milkshakes. Some black bloc protestors—the proper term for the subset of Antifa protestors who dress in black, cover their faces with bandanas, and are more likely to view violence as a viable tactic—were prepared to meet fascists with violence. And some did.

During the skirmish, Antifa demonstrators milkshaked and assaulted Andy Ngo. Some people consider Ngo a journalist, but he might be more accurately described as an opinion columnist who uses light reporting to launder his reactionary views at the far-right publication Quillette.

First skirmish I’ve seen. Didn’t see how this started, but @MrAndyNgo got roughed up. pic.twitter.com/hDkfQchRhG

This led to the conflation of milkshaking with acts of violence, a confusion that was egged on Portland police who relayed an erroneous claim that protestors were mixing quick-dry cement in milkshakes. Right-wing media figures like Jack Posbiec ran with the claim, spreading disinformation online. Some even asserted that protestors were mixing battery acid in with the milkshakes, causing chemical burns.

Is this the quick-dry cement being mixed into milkshakes by Antifa? pic.twitter.com/lcjQDey8F3

Misleading pics feature in the "cement milkshake" narrative. @javier_pan01's image of a supposedly milkshake-induced chemical burn is a stock photo, and @JackPosobiec's speculation that a specific picture shows folks mixing cement milkshakes has been debunked by the photographer. pic.twitter.com/LPdhmcSege

The incident led to pushback against Antifa by mainstream journalists like Jake Tapper and renewed attempts by right-wing outlets to discredit the non-violent aspects of the movement. Even Senator Ted Cruz joined the pile-on. A GoFundMe for Ngo’s relatively minor injuries set up by fellow right-wing reactionary Michelle Malkin netted the writer nearly $200,000.

Troubling, if true. Should “journalists” be inciting physical violence against those with whom they disagree? Calling for assaults with milkshakes apparently laced with quick-dry cement? Is that consistent with journalistic ethics or responsibility? Or the criminal code? https://t.co/A07icUZYGM

Left-wing outlets and progressive journalists then renewed and escalated their defense of Antifa.

white supremacists call for genocide, organize and carry out multiple assaults and murders…

antifascists throw a milkshake at a shitbag posing as a journalist…

mainstream media: these things are the same and equally threatening to social order#antifa

Although the future of milkshaking is unclear, the power of the milkshake as a divisive political symbol for both the left and the right will likely only continue to grow.