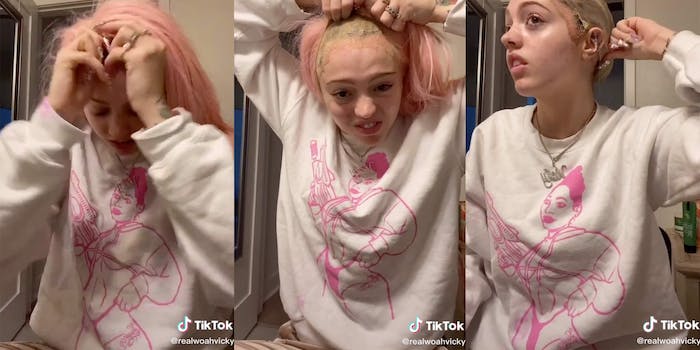 You hate to see it.

Woah Vicky, whose journey into social media stardom has included overt blackfishing, has received her just desserts. In a recent TikTok video, she totally destroyed her hair because she didn’t know how to take off a lace-front wig correctly.

Despite having two white parents, Vicky, whose full name is Victoria Waldrip, once claimed she was 25% Black while speaking in a “blaccent” with gold grills and a do-rag.

“I’m sick and tired of telling y’all what freaking race I am,” Waldrip said in the now-deleted Instagram video. “I’m Black. B-L-A-C-K, end of story, Black. Y’all never heard of light-skinned? That’s what I am. Light-skinned.”

But if she really had a Black mother or even knew Black women, she would have been aware that pulling off a glued-down wig—with not so much as a splash of water—was going to even up in disaster.

In the TikTok video, Waldrip breathes as if she’s suffering a heart attack while she slowly and surely painfully pulls out her edges. (The “edges” are the small, more delicate hairs existing at the hairline.)

She didn’t use water, oil, or any product to take off the wig. There was no acetone or rubbing alcohol to break down the glue. A simple Google search would have fully explained how not to destroy her hair.

The Black women above have their edges adequately laid. But Waldrip will never again experience this feeling, as her hairline will look like a Barbie doll’s for the remainder of her life.

The 19-year-old is known for throwing hands with Bhad Bhabie, aka Danielle Bregoli, the culmination of beef that apparently began after Waldrip released a highly-problematic diss track called “Ching Chong” for which Bregoli called her out.

Waldrip may have won the insignificant “who’s Blacker” battle over Bregoli, but she’s lost the war of appropriating Black culture. At least she’ll have Rachel Dolezal on her side.

Ok I got a new job idea for her: go to all the white hairdressers tryna do black hair and help them do better. Yeah she aint got no edges but that's not contagious. https://t.co/1BO5mr8To5