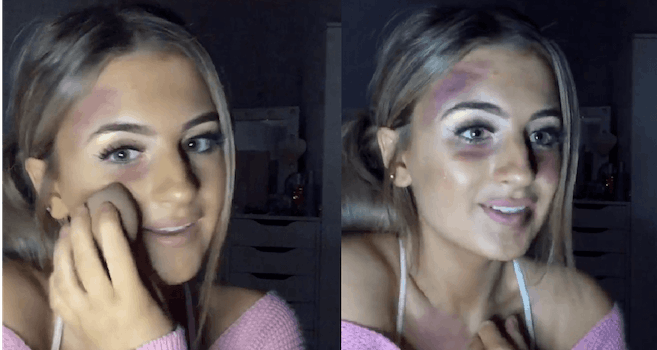 The video shows the bruises on her face progressively growing.

A teenager’s video on TikTok has gone viral for its message about domestic violence.

Amber, who is reportedly known for her makeup videos on the platform, shared a video of herself lip-syncing to “Not Fair” by Lily Allen, the New York Post reported.

The video starts with the teen seeming happy, but as the song progresses, bigger and darker wounds appear on her face. The contradiction of her bruises growing as she sings “Oh he treats me with respect,” and “He says he loves me all the time” is haunting—and serves as a reminder that domestic violence often hides behind the guise of romance.

“#pov your friend is trying to convince you the bruises you spotted aren’t from her boyfriend,” Amber wrote in the description of the video, which has since received more than 200,000 likes and been viewed more than 1.7 million times, according to the BBC.

“The message of the video is don’t ignore the signs of domestic abuse,” she told the BBC. “If you have the slightest concern, bring it up with the person.”

The video prompted many to share their personal accounts of surviving domestic violence.

“Been here, came out the other side,” said one person, according to the BBC.

Others thanked her. “This is so powerful,” one commenter said.

There was some debate on whether the clip should be on a video platform primarily designed for light-hearted lip-syncing. But it’s not the first time TikTok has hosted controversial content: In November, a Muslim teen’s video on China’s treatment of Uighur Muslims went viral on the platform.

One person reportedly said domestic violence, “really does happen to people and they don’t make TikToks about it.”

On average, 20 people are abused every minute by a partner in the U.S. Amber’s video is a fitting metaphor of the crisis.