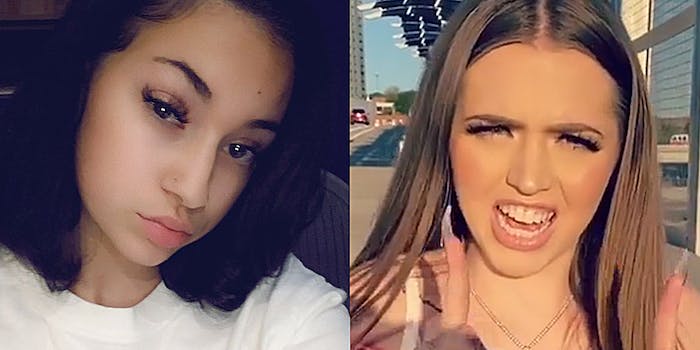 Bhad Bhabie and Woah Vicky threw hands in the studio

'Face untouched without even a lash missing.'

Bhad Bhabie and Woah Vicky are feuding again, and this time things got physical in the studio. The teen rappers, whose real names are Danielle Bregoli and Victoria Waldrip, were filmed fighting at a studio in Atlanta on Wednesday while others tried to break up the scrap.

It’s unclear what the two were fighting about, but the drama seems unlikely to end anytime soon. Woah Vicky posted footage of the fight on her Instagram story and said she had Bhad Bhabie beat. But then Bhad Bhabie called out Woah Vicky on her Instagram Story, saying, “Why you don’t just pull up with no dudes… nobody holding nobody back lol have fun editing your video.”

Bhad Bhabie and Woah Vicky have been feuding publicly since 2018 when another video of the girls fighting went viral. The beef seems to have started after Woah Vicky released a diss track called “Ching Chong,” which many claimed was racist, and Bhad Bhabie called her out. Bhad Bhabie told Woah Vicky “you can’t even talk right. You need speech class.”

The heated exchange eventually escalated to a fistfight, and other influencers took sides. Lil Tay was watching the fight and called Bhad Bhabie a “broke-ass bitch” and said she can’t “fight for shit.”

According to Bhad Bhabie’s Instagram story, she escaped the most recent bout “face untouched without even a lash missing.” Both influencers have since posted saying they’re ready for round two.