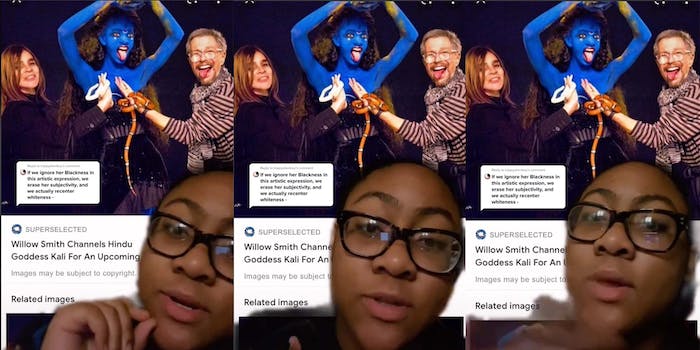 ‘It’s wrong and disrespectful to do‘: Willow Smith under fire for cultural appropriation

'That's not an excuse to use Hinduism in your spirituality without fully being Hindu.'

Willow Smith is being accused on TikTok of culturally appropriating aspects of Hinduism.

TikToker @.lourds pointed to a photoshoot Smith did in 2015 wherein she was dressed up as the Hindu goddess Kali. The video has been viewed over 83,000 times since being posted on Friday.

“Willow Smith has claimed she is spiritual and left it at that,” @.lourds says in the video. “So, that’s not an excuse to use Hinduism in your spirituality without fully being Hindu.”

@.lourds goes on to say that Smith’s actions are wrong and disrespectful.

Studio Atao, a think tank, defines cultural appropriation as “the adoption of elements of one culture by another, especially in cases where a dominant culture exploits aspects of a minority culture outside of its original cultural context and/or at the expense of the original culture for personal gain.”

@.lourds’s video is a followup to a more straightfoward TikTok she posted the same day that states that Smith “appropriated Hinduism.” That video similarly went viral, with over 1.3 million views.

In @.lourds’s video, she seems to say that Roitfeld and Goude “taught [Smith] about her spirituality.” She then says she’s “pretty sure” Roitfeld (who she points to) is “not Hindu” and that Roitfeld picks and chooses “parts of religion to believe in.”

The TikToker doubles down on this statement in a comment on her own video: “This isn’t up for debate—she isn’t Hindu. This was extremely out of place to do. She also learned this from a white woman who also appropriates.”

In a 2005 interview with the Telegraph, Roitfeld said she is “not religious.” The fashion editor has, however, used aspects of Hinduism in some of her other work.

Smith spoke about her spirituality with the Fader in 2014, which she called her “journey of self.” She says nothing of being taught by Roitfeld and Goude.

Smith currently has “Bhakti,” a Hindu phrase that translates to attachment to God, in her Instagram bio. In July, she got a tattoo of the Hindu goddess Saraswati.

In another followup video, @.lourds counters a commenter who wrote that white people aren’t using Smith’s songs by showing white creators having used Smith’s “Meet Me At Our Spot” in their TikToks.