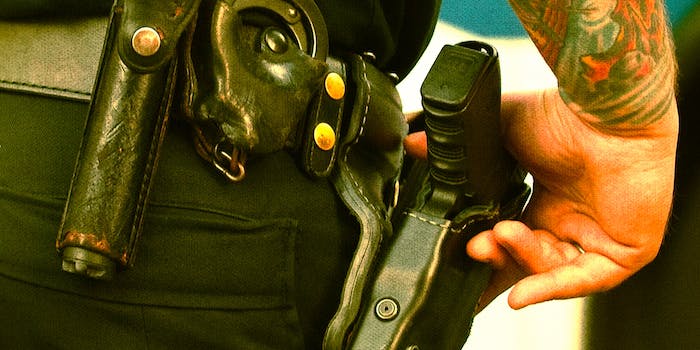 The numbers behind the ‘war on cops’

Look at the facts.

The headline was big, bold, and bannered on the front page: “WAR ON COPS.”

An Illinois police officer, Charles Gliniewicz, was shot and killed on Tuesday morning after a foot chase of three male suspects, two white and one black. As police responded throughout the state, the manhunt took over all the 24-hour cable news networks and rocketed across the Internet.

The police officer’s death climbed to the top of Breitbart.com, a popular conservative news site that is increasingly driving right-wing conversations in the United States, furthering the “war on cops” narrative amid growing anti-police movements in the U.S.

But is the “war on cops” more than just a talking point? 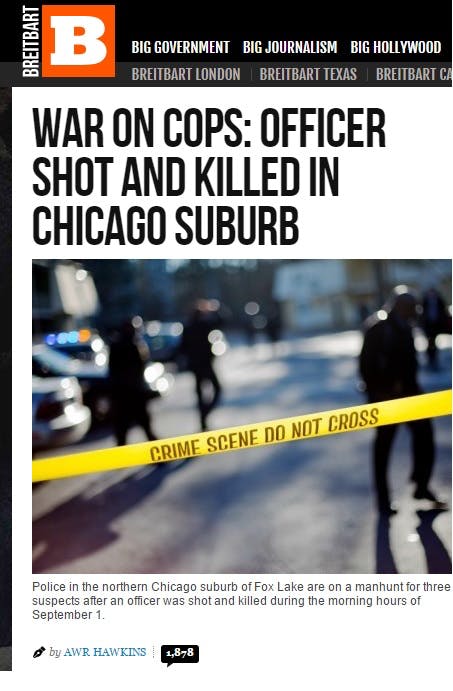 Breitbart declared in its most prominent headline that the murder of Gliniewicz was a part of a larger “WAR ON COPS” that is a direct result of the way the media promoted “a dangerous mythology” about the publicized death of several black men at the hands of police, including Eric Garner in New York City and Mike Brown in Ferguson, Missouri.

There’s no evidence to suggest that the killing of Gliniewicz was planned or can be linked back to those incidents. However, the argument from people like Milwaukee County Sheriff David Clarke is that the Black Lives Matter movement, which focuses its efforts against police violence, promotes a larger disrespect for police officers and a disregard for their lives.

The number of police officers killed by gunfire this year has dropped 13 percent.

“This is nothing more than an attempt to weaken the institution of policing,” Clarke said on CNN this week.

Ever since the nationwide protests for Garner in December 2014, conservative pundits and politicians like Pat Buchanan have made a habit of promoting the war on cops as “a narrative the media ignore.”

“It’s open season [on police officers] right now, no doubt about it,” Sheriff Clarke argued on Fox News this week.

“Everybody’s scared to death to do their job,” he added.

The “war on cops” narrative has even crept into the 2016 Republican presidential race.

“We are seeing a manifestation of the rhetoric and vilification of law enforcement that is coming from the top,” Sen. Ted Cruz (R-Texas), a presidential contender, said this week, “all the way to the president of the United States and senior administration officials.”

The execution-style murder of a Texas deputy last week and the assassination last year of two NYPD officers sitting in their cruiser are cited as proof that the war on cops is a real and escalating conflict.

Shocking and disturbing as these murders are, there is no war on cops, according to the data.

The number of police officers killed by gunfire this year has dropped 13 percent, according to the National Law Enforcement Officers Memorial Fund (NLEOMF). While 26 officers have been killed this year, the number was sitting at 30 this time last year.

Relatively speaking, 2014 was a particularly safe year for police officers. In the last decade, only one year (2013) has had fewer police deaths. In the last two decades, 19 years have had more police deaths than 2014. Fatalities haven’t been this consistently low since the 1950s, and the number of assaults and resulting injuries have been dropping for a decade as well.

Overall, 2015 is on pace to have more police deaths than 2014, but that is due to traffic accidents and other causes, according to the NLEOMF.

The number of people killed by police, however, rose last year from 768 in 2013 to 1,106 in 2014, according to data collected from news reports. This year is on pace to top that number.

In many ways, the war on cops narrative is Breitbart.com boiled down to its very essence. The 8-year-old website, founded by conservative commentator Andrew Breitbart, was the tool with which he fought the so-called “Democrat-media complex.”

“I’m committed to the destruction of the old media guard,” Breitbart, who helped found the Drudge Report and Huffington Post, said in 2010. “And it’s a very good business model.”

Breitbart died in 2012, but his eponymous site has become a rapidly growing and global operation since then. It’s now operated by executive chairman Stephen Bannon, a conservative former documentary-film maker and investment banker behind movies like Occupy Unmasked, Battle for America, and Still Point in a Turning World: Ronald Reagan and His Ranch.

“I’m committed to the destruction of the old media guard.”

Bannon, who models the site in may ways off of the left-leaning Huffington Post, has orchestrated a major private-investment-driven expansion based on “a growing global anti-establishment revolt against the permanent political class.”

Breitbart News has used the phrase “war on cops” dozens of times in headlines and articles since December 2014.  Almost without fail, it provokes a major reaction from readers who voraciously view, like, and share the stories across social media, with numbers that would make any online publication jealous.

Stories on the subject get tens of thousands of likes and shares on Facebook. That’s a metric that might not mean much to most people, but translates to serious success for the savvy media executives that run the Los Angeles-based Breitbart today.

The readers, supporting ideas put forward by people like Buchanan, Cruz, and the Sheriff Clarke, emphatically blame President Barack Obama for his lack of support of police officers who are “under siege.”

The war on cops is being ignored by “the old media guard,” Breitbart’s writers regularly argue. That makes it the perfect story for them.

Correction: Trayvon Martin was not killed by a police officer but by a volunteer neighborhood watchman, George Zimmerman.