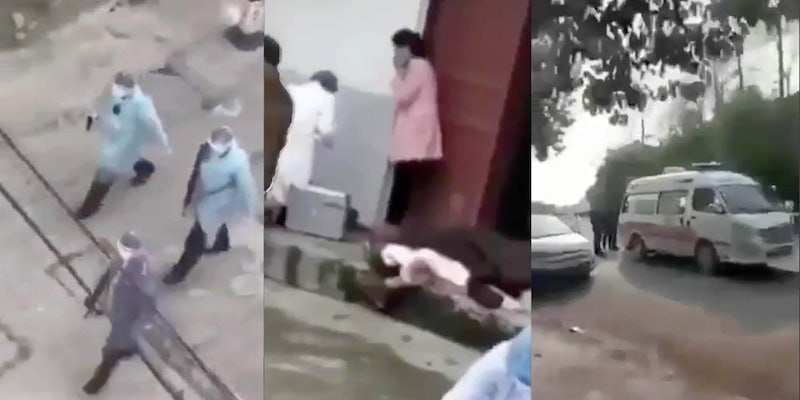 A video has gone viral online that is alleged to show Chinese doctors carrying guns amid the coronavirus outbreak.

The clip, which was circulated by Twitter users, such as Hollywood actor James Woods, claims to be out of Wuhan, China.

Analysis from fact-checking website Snopes indicates that the footage is actually compromised of three separate clips seemingly edited together to create the appearance of one incident.

Those sharing the video have claimed, among other things, that doctors in China have resorted to shooting those infected with the coronavirus as opposed to treating them.

While an original source for the first clip has not been found, evidence suggests that the armed individuals in the clip are police, not doctors. Not only can a police car be seen, but law enforcement has been pictured wearing identical protective gear throughout the country.

The Chinese Global Television Network (CGTN) has since claimed on Twitter that the first clip was related to an incident in which officers were responding to a rabid dog.

The second clip shows a hectic scene in which alleged medical professionals are tending to individuals laying on the ground. Those sharing the clip have claimed that booming sounds in the background are gunshots aimed at stopping infected people from escaping the area.

Snopes notes that the clip began getting shared online around Jan. 25 when Chinese residents would have been setting off fireworks for the Lunar New Year. None of the people in the clip appear concerned about the sounds either and no firearms are present in the footage.

The third and final clip in the video shows a woman lying on the ground. Once again, Twitter users have claimed without evidence that a female had been shot after attempting to break through a blockade.

Reports from French media indicate that the woman had actually died in a motorbike accident. A scooter can be seen on the ground in a longer version of the clip as well.

“In the afternoon of January 29, a one-sided [one-vehicle] road accident occurred in the city of Wuzu,” Les Observateurs France 24 reports. “The person involved was driving a scooter and, due to bad traffic maneuver, she shifted to the side of the road, collided with the stones along the ledge and fell on the back of the head, and unfortunately died.”

While some questions remain regarding the first two clips, no evidence backs up the claim that doctors are carrying firearms and shooting the sick. And given that the final clip appears to be entirely unrelated to the coronavirus, it appears likely that the videos were edited together in an effort to take advantage of fears over the outbreak.