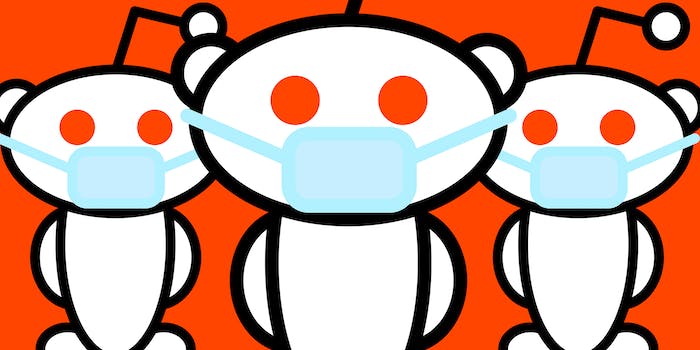 A subreddit war is raging over the coronavirus

There's a fight brewing online to be the authority on the coronavirus.

Since first emerging in December 2019, the novel coronavirus (also called the Wuhan coronavirus after the city in China where it appears to have developed) has spawned an outbreak of conspiracy theories and allegations.

Supposed plots to create and spread the virus have pulled in everyone from Bill Gates to the Chinese government itself, while every day seems to bring some new bit of disinformation—either a quack cure, or a racially-driven panic, or a new wrinkle in the ongoing conspiracy to protect whoever “really” is behind the virus.

Meanwhile, the infection count and the number of dead grow by the day.

Desperate, concerned people are looking for information, seeking it anywhere they can find it.

The American media is covering the broad strokes of the outbreak, but is mostly left out of reporting on the ground. And Chinese media is actively covering up the size and scope of the outbreak

So it’s left to social media to fill in the gaps and tell the stories of the outbreak and its victims. Chinese social media itself is heavily censored, and both local officials and state-owned Chinese media outlets have been credibly accused of suppressing public health information. People are looking for somewhere to compare information, rumors, local news, and unconfirmed reports.

And it’s causing confusion and misinformation on the internet’s largest forum: Reddit.

Multiple coronavirus subreddits exist on the site, each with large followings, and at least one is actively trying to undercut the others with claims of state censorship and infiltration.

The drama of coronavirus Reddit pales in comparison to the threat faced by actual outbreak victims. But as much as this is a battle against the disease, it’s a battle against disinformation about the disease. Rumors and hoaxes spread much faster than actual news stories and debunkings. And it’s kept moderators of all the outbreak subreddits busy taking down rumors and controlling disinformation.

So far, there are three main subreddits all posting exclusively about the coronavirus outbreak: r/Wuhan_Flu, r/China_Flu, and r/Coronavirus. There are also coronavirus posts on the general r/epidemic forum, along with large outbreak-related threads on more general subreddits like r/news.

There are also the usual conspiracy threads and nonsense on places like r/conspiracy and r/memes, along with more scientific and medical posts, as well as “ask me anything” sessions.

With much of the information about the outbreak proving hard to confirm, these subreddits are popular with people looking for real-time updates.

Reddit seems to realize how much people are depending on them for accuracy and moderators have gone to great lengths to curb disinformation. Mods in the main coronavirus subs are working overtime in labeling posts that are local news reports, unconfirmed rumors, discussions, or general information—while also trying to pull down conspiracy theories and hysteria.

Each of the three main coronavirus subreddits has about 50,000 readers at any one time, with each one offering a slightly different spin on the outbreak.

While r/coronavirus offers a more worldwide perspective on the outbreak, the most popular individual posts are from Chinese citizens using Reddit to get around the censorship on Chinese microblogging sites, trying to reveal what life is really like on the ground in Wuhan. While difficult to confirm, the stories match up with media reporting and offer heartbreaking and detailed stories that often get missed in the rush to cover the bigger picture.

Reddit users tell of dying loved ones, empty streets, hugely conflicting numbers of infected and dead, and citizens who have no idea when or how the outbreak will end.

China_flu is devoted more to tracking individual diagnoses and providing additional on-the-ground perspectives and local reports from an almost exclusively Chinese perspective. Between the two, they provide an almost minute-by-minute chronicle of the outbreak’s spread and the measures being taken to combat it. But there are also a lot of conspiracy theories and rumors—and with them, the inevitable conflicts that arise between people looking at a story from the perspective that they’re being lied to by authorities.

The third major subreddit, Wuhan_flu, has established itself as being the most conspiratorial of the three. Posts there accuse doctors in Wuhan of lying about how deadly the virus is, claim the virus was combined with HIV in a high-level biowarfare lab in the city, and accuse China of “disappearing” journalists and whistleblowers trying to expose the true horror.

It’s become so engulfed by conspiracy theories and accusations that Reddit took the step of quarantining the sub, making users have to click on an additional screen in order to see it.

This is a step usually reserved for places like r/the_donald, subreddits that are overrun by threats of violence, harassment, and racism. Naturally, the result is that the top posts on Wuhan_flu are almost entirely about the quarantine, and the censorship they think Reddit is foisting on them.

Wuhan_flu contains a number of accusations that “something truly fishy” is going on on the other two major subs, but posts on r/conspiracy take the plot even further.

One post, “r/China_Flu Infiltrated and Controlling 2019-NCOV Information Domain,” tracks all of the moderators assigned to each coronavirus subreddit, declaring “Sub is suspected for being infiltrated and controlling the flow of information on the spread of a population reducing virus.”

Another popular post on r/conspiracy, with nearly 500 comments, alleges that Wuhan_flu sub was quarantined on the orders of Chinese officials because it was getting too close to the truth about who “really” created the virus and why.

The Daily Dot reached out to Reddit regarding these allegations and hadn’t received a response at press time.

In just one positive example, University of Florida virologist John Lednicky held a popular “ask me anything” session on the outbreak, answering questions about how to distinguish the coronavirus from the flu, simple protective measures to take, and the prospect of a coronavirus vaccine.

It’s easy to believe that internal drama on social media has no bearing on how a massive global pandemic is treated.

But we’ve seen time and time again how misinformation on social media harms people looking for answers. We can see it now with the coronavirus outbreak, as conspiracy theory gurus push quack cures like medical bleach and racially-driven hoaxes about Chinese people eating bats being the cause of the virus. It’s particularly meaningful that Reddit and its moderators are working so hard to take down misinformation, since Reddit is one of the largest social media sites on the internet.

While Reddit has been blocked in China since 2018, the block can fairly easily be evaded using an (illegal) virtual private network—making it a vital forum for Chinese citizens to get around state censorship of “legal” social media services like Weibo.

They are breaking the law to get out desperately needed, truthful information to the public. And to learn what they can’t from the state.

Instead, they’re hit with waves of conspiracy theories that might make it all worse.