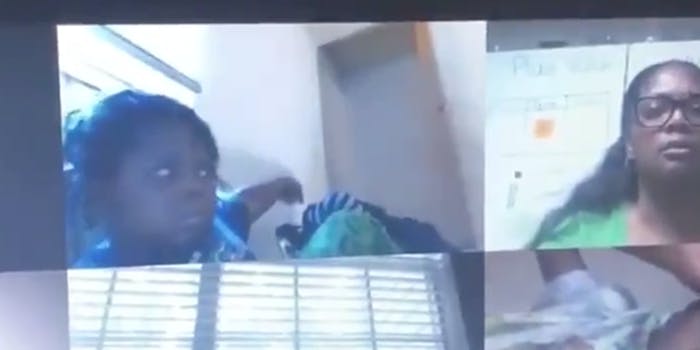 Zoom classes seem to be going further off the rails than anyone could have imagined these days, and we can now add accidental Zoom flashings to the growing list of recent mishaps alongside staged kidnappings, video bombings, and parental interruptions.

A recent video circulating online shows a child’s mom accidentally entering the frame of his camera while naked, causing immediate outrage from the student’s teacher.

The video posted Sunday has been shared on Twitter over 100,000 times by users. The video has sparked mixed reactions, with some finding comedy in the moment—specifically one student who is seen sleeping throughout the whole incident—while others express controversy and concern for the child and say the Zoom flashing is rather disturbing.

The video begins as the class’ teacher is heard repeatedly yelling at one student who is visibly knocked out with his head back during the class. Just a second later in another student’s frame, a woman appearing to be his mom shows up fully unclothed seemingly looking around the room for something when her son points at her.

“Oh my god,” the teacher shouts in shock, “who is that back there naked?!” She quickly tells the student to “turn your camera off,” when the mom suddenly realizes she is caught on camera, running out of the frame.

Users on Twitter quickly reacted, finding the pure chaos of the video to be hilarious.

For others, the video was not as funny, and in fact, represented concern for the overall adjustment to online learning as well as the mother’s behavior in general.

One user wrote, “My thing is, a lot of parents were complaining about sending their kids back to school (which I completely understand).. but some parents aren’t even trying to help their kid adjust to virtual school.”

This article has been updated for clarity.