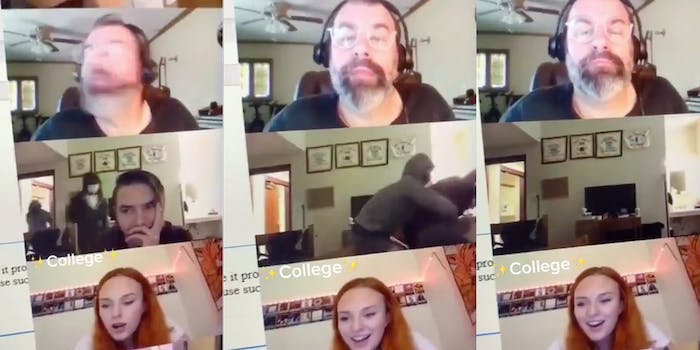 Teens are staging Zoom kidnappings to get out of online classes

'Did you guys just see Tyler get kidnapped?'

In a new viral trend, high school and college students staging Zoom kidnappings during virtual class meetings to get out of lectures, tests, and quizzes.

The pranks organized by students and their friends often cause startled reactions from instructors who witness their students seemingly taken hostage in front of the class. Various versions of the stunt have been captured by fellow classmates and later shared online.

In one viral Zoom kidnapping that has been viewed nearly 3 million times on Twitter, a student named Tyler is seen being dragged out of his room by two men in grey and black hoodies as the professor discusses class readings.

Following the incident, the professor pauses and asks, “Did you guys just see Tyler get kidnapped?” Another student laughs as the professor asks, “Do we need to call the police?”

A similar video shared to Instagram showed two men wearing all black throw a bag over a student’s head and carry the student away from the Zoom call.

“Oh my god,” the teacher says. “What did I just witness?”

In another video, a student pretends to fight back against his kidnappers in a struggle that lasts a few seconds before the group successfully carries him out of frame.

One Zoom kidnapping “gone wrong” resulted in a student boxing with the “kidnapper” as the class watched.

A TikTok account dedicated to Zoom kidnapping videos, @Zoomnappers, has over 230,000 followers.

The videos have been well-received as a comedic break from Zoom fatigue and other school-related stressors.

But the videos have also sparked concern for others who feel that they could turn dangerous.

“I look forward to the first story where someone ACTUALLY gets kidnapped in the middle of a ZOOM call,” one Twitter user wrote, “and nobody believes it until they’re missing for like 2 weeks.”