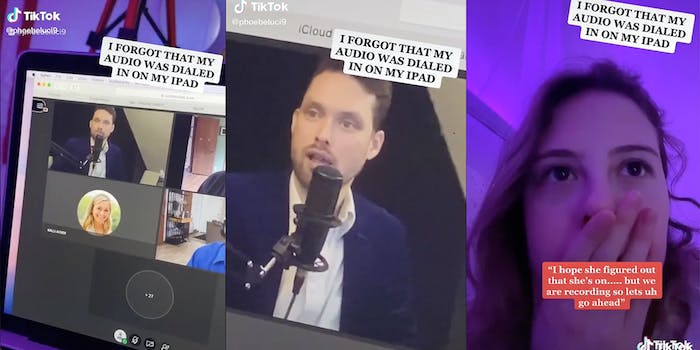 Girl forgets mic is on during Zoom class, talks about how ‘sexy’ her lecturer is

Between online class interruptions and staged kidnappings, as if Zoom classes couldn’t get any more awkward, people are now exposing themselves by forgetting to mute their mics. A recent TikTok video shows one student suffering complete embarrassment after she unknowingly made comments about how “sexy” her guest lecturer was for the entire class to hear.

The video shows the awkward Zoom moment first-hand, capturing the lecturer’s stunned reaction to the comments and the student’s own shock after realizing her mic was broadcasting to everyone in the session.

“Sorry for exploiting you my sexy guest lecturer man, respectfully dropping out now,” wrote the student in the video’s caption. She explained in text added over the video that while her laptop’s mic was muted, her conference call’s audio was “dialed in” through her iPad instead.

“This man is so sexy, are you fucking kidding me,” she can be heard saying as she zooms in on the lecturer’s face. “I will listen to anything you say.” Immediately after making the statement, she gasps, realizing her mistake. The lecturer’s eyes scatter around the screen as his jaw slightly drops before his expression goes blank.

To make matters worse, according to a later comment left by the original poster, the lecturer was a guest for her ethics class. “I hope she figured out that she’s on… but we are recording, so let’s, uh, go ahead,” her professor responds, quickly rebounding from the incident.

Users responded to the student by joking about the second-hand embarrassment they got from watching the video. The video has now been viewed over 2.4 million times on the platform.

“No choice but to move to another country and change your name,” one commenter wrote. “It’s the fact that zoom focuses on your face when you speak, RIP,” wrote another user. Other users responded on the brighter side, with one joking: “And that’s how your father and I met.” And another user said, “Rip but that probably made his year.”

A later video was posted by the student, updating followers on the aftermath of the incident.

She says that an email was addressed to the entire class reminding students of an administrative and social responsibility to “keep the content among ourselves.” Additionally, she adds that the lecturer apparently saw the video going viral online and made his own TikTok jokingly responding to it.

“So I’ve actually entered my next karmic life stage, and I’m a dog,” she says. “I’ve left the past behind me.”