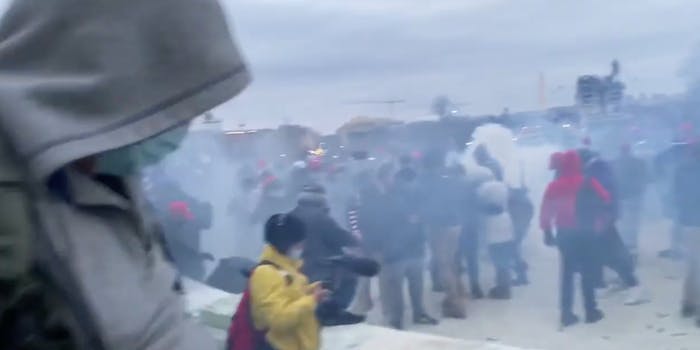 A viral video shows a Capitol rioter attempting to start a chant of “I can’t breathe” after being sprayed with tear gas outside of the government building on Wednesday. The clip sparked outrage over the audacity of the rioter to co-opt a Black man’s final words before death.

Much has been made of the fact that U.S. Capitol Police did not use anywhere near as much force against violent Capitol rioters as officers used against peaceful Black Lives Matter protesters. Police pushed back so little on Wednesday that Trump supporters were able to seize control of the Capitol, sending members of Congress into lockdown and causing destruction in the building for hours.

Eventually, rioters outside the Capitol were hit with tear gas as police tried to regain control of the situation and disperse the crowd. Video shared to Reddit’s r/PublicFreakout page shows two minutes of rioters reacting to sprays of tear gas. The choppy footage, recorded by right-wing provocateur Dianna Ploss, shows people coughing and yelling at the scene.

About 30 seconds into the clip, a man repeatedly says “I can’t breathe.” Black Lives Matter activists used the chant in peaceful protests over the summer in response to the killing of George Floyd, who told police he couldn’t breathe as former officer Derek Chauvin knelt on his neck for more than eight minutes until he died.

The phrase has a long history in Black activism against police brutality. It started with the death of Eric Garner in 2014, who was choked to death by police after also stating that he could not breathe.

“Fucking despicable,” wrote user u/p_thedelinquent. “These are the same people that make caricatures of those like Eric Garner and George Floyd.”

In addition to attempting to start an “I can’t breathe” chant, rioters getting tear-gassed in the video can be heard repeatedly yelling that they are “getting attacked,” a comment that was blasted on Reddit.

Some expressed hope that getting tear-gassed might help Trump supporters realize what Black Lives Matter protesters have been up against. The critical difference is that Black people are policed for living their lives, and Wednesday’s rioters were policed for breaking into the Capitol.

Reddit user Kabansmash summed it up: “These people are so goddamn desperate to be persecuted.”