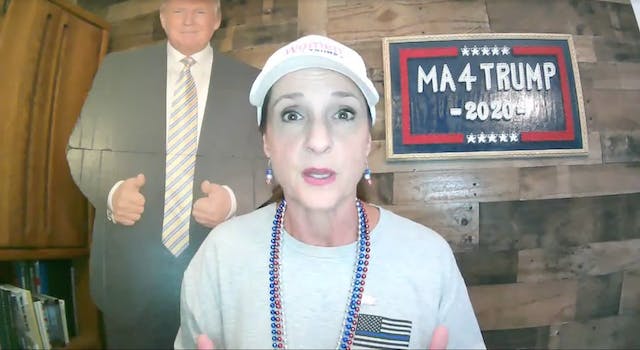 'I'm sick and tired of pressing 1 for English.'

Conservative radio show host Dianna Ploss was yanked off the air after she posted a live stream that showed her yelling at Spanish-speaking workers for not speaking English, CNN reports.

Ploss, whose talk show aired on New Hampshire radio station WSMN 1590, posted the live stream Friday that showed her berating landscapers on the sidewalk as they worked and demanding they speak English.

Ploss asks if anyone there is “illegal” and says that they should speak English because “it is America.”

“So, now they have people who don’t speak English who are putting in this stuff that taxpayers are paying for and look at what they’re doing,” Ploss says. “This is communism.”

Near the end of the live stream, a man crosses the street and approaches Ploss. He asks her why she is harassing the workers.

“They should be speaking English,” Ploss says. “Are they illegal aliens? Do they not speak the language? … Why do you care? I’m not talking to you.”

Ploss calls the man a “social justice warrior” and walks away.

“He’s a Black man and he’s going to protect the brown man from this white woman who is practicing white privilege,” Ploss says.

WSMN 1590 issued a statement Sunday confirming that the station will no longer host Ploss’ show.

“We at WSMN value freedom of speech, freedom of expression and assembly,” the statement said. “We will not tolerate discrimination, racism or hatred.”

Ploss issued a statement on Monday and said she will not apologize for her behavior and said that she has received a lot of threats since the video went viral.

“Here’s what I have to say to those who have attacked me: Blank you,” Ploss said. “Now, get out of my way because I have a country to save.”

Ploss said she is “sick and tired” of “pressing 1” for English.

She said she is not going to be “a second-class citizen” and addressed Black Lives Matter supporters.

“And for those of you commies and BLM supporters who are watching right now: ‘B-L-M’ burn, loot, murder,” Ploss said.

Tom Morin, the owner of the landscaping company whose workers faced Ploss’ harassment, thanked those who sent “overwhelming support” after watching the live stream.

“I believe that we can all take immense pride in how quickly the community rallied to demonstrate that this type of behavior is completely unacceptable and will not be tolerated,” Morin wrote. “As a result of everyone’s efforts, I am confident that significant progress was made towards solving what can so often appear to be an unsolvable problem.”

Morin thanked his team members and the concerned citizen who approached Ploss.

“We recognize that any success we are able to achieve is only through the collaborative efforts of the many extremely talented and hardworking individuals,” Morin wrote. “Who are not only native to our area but also represent several countries and various cultures.”