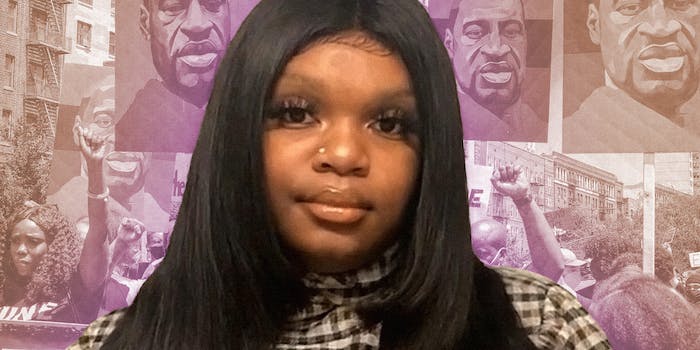 On May 25, Darnella Frazier began her day as a normal 17-year-old Black girl. By the day’s end, she had recorded an interaction between a police officer and a citizen that she could not walk away from—and her life changed forever.

In the video, white police officer Derek Chauvin used his knee to pin down George Floyd, who begged “please, please, please” for his life. Other officers helped to hold down Floyd’s limbs, and onlookers idly watched. Frazier, however, pulled out her cellphone and began to record. Her act captured images of the brutal murder of a Black man by police in broad daylight. America would not be able to turn away.

Twenty seconds after the camera began rolling, Floyd uttered some of his last words. “I can’t breathe” became a rallying cry across the globe for millions who marched, protested, and rioted against police violence and systemic racism. Across the U.S., citizens poured into the streets, and buildings and cars were set ablaze, reflecting rage that the country could no longer ignore.

On that day, Frazier became both a citizen journalist and an activist. She also became an American hero, and for that reason, she’s the Daily Dot’s Internet Person of the Year.

Social media made capturing and sharing information with a mass audience fast and easy. Today, we live stream and share photos and videos on platforms where millions can have instantaneous access, a tool that during the coronavirus pandemic both connected friends and families and revealed nefarious behavior.

For Black people like Frazier who live in communities that face disproportionate rates of lethal violence from police, tech forced the nation to share their burden and trauma. The video Frazier uploaded shared her perspective of her world as a Black teen.

From that perspective, we learned that a Black child can be engaged in normal daily life—Frazier was walking to the nearby grocery with her 9-year-old cousin—and stumble upon the violent scene of police killing a man in broad daylight. We learned that a Black child felt obligated to capture and share the footage because failing to do so could mean there would be no accountability from police and no justice for Floyd.

Frazier’s video became a looking glass for a massive audience to peer into the world of America’s Black people, an often harrowing, painful, and violent world where police can target citizens on a whim. The video also became America’s mirror wherein Black reality was clearly reflected despite centuries of the whitewashing of the nation’s history and image. The reality crashed into suburban homes via the evening news, destroying any delusion that the country had defeated its problem of systemic racism.

Frazier’s impact and sacrifice did not end with capturing and disseminating the images that would shatter the worldview of millions. In the months since the video went viral, Frazier was ridiculed by some on social media who accused the teen of using the moment “for clout” and not doing enough to help Floyd during the last moments of his life. She also had to relive her trauma multiple times in order to give witness statements to the FBI and Minnesota officials. During those interviews, she reportedly said that she saw George Floyd’s face as he was dying every time she closed her eyes. It is also anticipated that she will be called as a witness during Chauvin’s trial.

Frazier is worthy of not only being the Daily Dot’s Person of the Year but also of being a national hero whose name should be recorded in history books. Her legacy will show the power of technology in the hands of Black people, specifically Black women who despite centuries of oppression continue to demand accountability and respect. Frazier’s bravery forces a reckoning with the many ways Black people are forced to labor under the weight of systemic racism, even while traumatized. Her act vanquished the American claim to colorblindness, and it was a call to action that millions answered with global protests against racist policing.

Now that the world knows the power of a single Black woman who chose to stand for justice, it is impossible to deny the power we have to collectively transform society and inspire change with the tools the digital era has conferred. Like Frazier, we must make it our duty to never look away from wrongdoing, even if it is being perpetrated by those in positions of power. We must embrace and amplify the perspectives of marginalized people who have been voiceless in America for far too long. We must make it our duty to use technology to demand accountability.